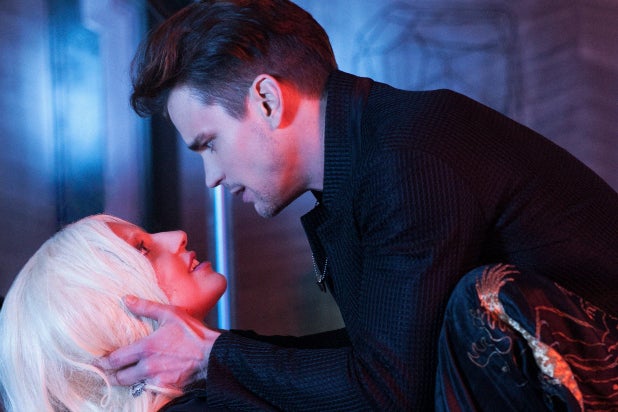 When it comes to building allure around high profile actors in mysterious roles, Ryan Murphy has got any other showrunner beat. So it should come as no surprise that the main reason curious viewers will “check in” to “American Horror Story: Hotel” is to see Lady Gaga in all her bloody glory.

They won’t be disappointed.

In the first season of the anthology horror series not to feature Jessica Lange as a leading lady, Lady Gaga‘s introduction is perfectly timed to replace what would have otherwise been a gaping casting hole. There is a feeling that Kathy Bates as the jaded desk clerk has stepped into a role Murphy may have envisioned for Lange, especially following the reveal she has an ongoing rivalry with Sarah Paulson‘s drug-addled character. As their history unfolds it feels like a classic Paulson-Lange “Horror Story” setup, but it works here because Bates brings an entirely new dynamic to the relationship.

It’s a visual, visceral romp into what is being set up to be another haphazard foray into the world of horror, as imagined by Murphy and his writing counterpart Brad Falchuk. The show has rarely made sense in terms of story, and this is no exception–Murphy and Falchuk know what their viewers are tuning in to see. Over the years the duo has transformed the series from the pop-up scare variety of “Murder House” days to the sexualization of violence we’ve often seen from the show since. Hotel, with its pointy peckers, bloody lips and endless lingerie offers it in abundance.

The story itself opens with two beautiful tourists, whose tour of the Hotel Cortez mirrors the viewers’ during the first meet-and-greet. Sprawling staircases, rich color palates and plush furnishings quickly demonstrate that “The Shining” is an obvious influence here, right down to the creepy children running around the halls.

“This place will grow on ya,” promises Bates’ character.

The outside perspective comes via a detective played by Wes Bentley. Naturally, he comes into contact with the hotel and its occupants early on, when a murder at another hotel (shot on location at the Loews Hollywood Hotel) leads him to the mysterious room 64, where a bleach-blond Max Greenfield has just been seemingly killed. Given his own tortured past and personal connection to the hotel’s inhabitants there is a sense he will succumb to the odd happenings at the hotel sooner rather than later–especially now that the antics have been amped up in anticipation of the new owner (Cheyenne Jackson) taking over. Freaks have to get their freak on, and all, and they don’t respond well to outside threats.

The final product, while still very much a Murphy with its gory twists, time jumps and introspective use of music (“Hotel California” is a fitting example in Episode 1), is still a refresh of sorts. By moving the setting from New Orleans to Los Angeles and expanding the cast to include more fresh faces (including Gaga), viewers tuning in will recognize the product, but not the placement. Even the opening credits, which continue to feature mangled bodies and creepy children, have been updated thanks to the posting of the Ten Commandments between snapshots. In short, what’s old is new again, a theme many hotels have used in their day. For “Horror Story,” heading into its fifth season, it sure feels due.