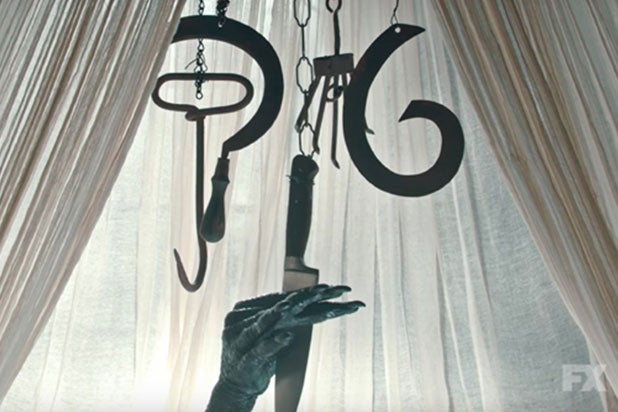 (Spoiler alert: the entirety of the season 6 premiere of “American Horror Story” is spoiled below. You have been warned.)

What exactly is the premise of season 6 of “American Horror Story”?

Yes, the rumors were true, in a fashion. The season is called “My Roanoke Nightmare,” a take on the haunted-house series you see everywhere on the cable dial these days. Except in this one, famous people play famous people, re-enacting something that may or may have not taken place in a very old house in North Carolina.

The title would suggest a connection to the legend of the Roanoke colony, an early attempt by the English to establish a permanent settlement in present-day North Carolina. Through one episode, the connection between the show and that legend remains unclear, however.

Now, to the nitty gritty. Below, you’ll find our live blog/recap for the season 6 premiere of “American Horror Story.”

9:59 p.m. ET: FX has thoughtfully scheduled “The Purge: Anarchy” before tonight’s “AHS” premiere. There are people getting shot and ending credits full of edgy shots of the American flag and guns and bloodstained money. Apropos!

10:01 p.m.: Ryan Murphy walks out in front of a Mercedes, because someone has to pay for this horrorshow, and introduces the premiere.

10:02 p.m.: All of our favorite cast members are here to introduce “My Roanoke Nightmare.” Yup, it’s about the Roanoke Colony! Sort of!

10:03 p.m.: Ryan Murphy saw those local news reports about that “Knockout” game. Yogi Shelby (Lily Rabe) and her beau Matt move to Los Angeles, when Matt is set upon by a gang using the knockout game for initiation, and gets knocked out — she loses the baby she is carrying. They are apparently being played by Sarah Paulson and Cuba Gooding Jr. in a re-enactment. Layers within layers.

Also Read: The Evolution of Donald Glover, From YouTube Star to 'Atlanta' (Videos)

10:07 p.m.: Shelby and her beau move into what is basically a murder house in North Carolina. They bid on the hulking wreck that was built in 1792. Shelby has doubts, as one does about anything that is old and in the South. Her husband does not.

10:13 p.m.: Cuba Gooding Jr. and Sarah Paulson are making love, and hear some freaky-deaky noises. They think it’s just hillbillies who were outbid for the creepy murder house. Sarah Paulson-Shelby thinks hail is human teeth and not ice. Matt, turns out, is a traveling salesman who spends a lot of time in Raleigh, two hours away.

10:19 p.m.: Sarah Paulson is drinking rosé and chopping vegetables and sees a pair of adult twin girls walk creepily through her house. Girl, get out of the house. This feels like a throwback to the first season of “AHS” in which everyone screamed “GET OUT OF THE HOUSE” at Connie Britton for the entire 13 episodes. She does get out of the house, but only to go in the hot tub outside like a fool, where she is promptly almost downed by a female-seeming spirit.

10:30 p.m.: Matt finds a dead pig on the grounds. He buries it and sets security cameras up, and then asks his sister Lee (re-enacted by Angela Bassett, confessional character played by Adina Porter of “True Blood”) to keep an eye on Shelby. Lee is addicted to opiates, a sad tale that feels like it wouldn’t really wind up in a haunted house show, but hey, you gotta fill an hour somehow.

10:36 p.m.: Angela Bassett-Lee is hanging on her sobriety by her teeth, but Sarah Paulson-Shelby is drinking like a fish. So that’s not going to work out well, particularly when Lee asks Shelby to not drink in the house. Meanwhile, surprise! Spooky things are happening at night, like a wine bottle rolling into Lee’s room. The two women are too busy arguing to notice the commercial break sneaking up on them.

10:42 p.m.: Torch-bearing maniacs are on their way to the house. Angela Bassett-Lee is too awesome for every character we’ve seen this far. She and Sarah Paulson-Shelby hear noises in the basement and investigate. Turns out to be just a TV on, playing a home movie of some kind… Which turn out to be some sort of monster. Maybe. Or maybe a guy in a pig mask. The power goes out, and Cuba Gooding Jr.-Matt rushes over to the house from Raleigh.

10:52 p.m.: According to Matt, locals and neighbors do weird stuff all the time to drive out new property owners and swoop in and take the property for cheap after driving down the property values. And apparently the reason Matt and Lee and Shelby don’t pack up and leave is that they spent all their money on the house and have nowhere they can really go if they don’t stay. Shelby does pack up and leave, though, in the car. “There’s no shame in getting the hell out of the way,” Lily Rabe-Shelby intones before Sarah Paulson-Shelby hits someone with the car.

10:54 p.m.: The woman Shelby hit with her car miraculously gets up and staggers off; Shelby runs after her into the woods and promptly gets lost, because she’s alone in the woods at night and you don’t even have the sun to figure out cardinal directions and that sort of situation really sucks, especially if you’re fleeing a murder house and hit someone with your car and then find creepy string art installations in the trees, like Shelby does.

Shelby then sees a guy who looks like he’s missing his scalp… and the episode ends. Roll credits on the “American Horror Story” season 6 premiere.

10:56 p.m.: Mark this date down in history, folks: An FX drama finished several minutes earlier than the hour.