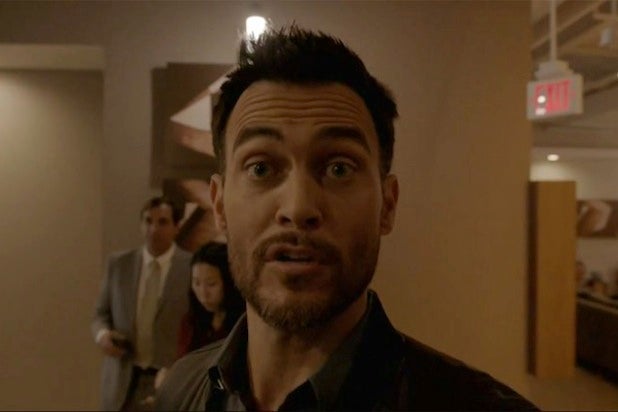 (Spoiler alert: Please do not read on if you haven’t watched Wednesday’s episode of “American Horror Story: Roanoke”)

The show’s mockumentary “My Roanoke Nightmare,” has finished telling its tale of haunts and bloodshed in the woods of North Carolina, and now it’s time to go behind the scenes of this show-within-a-show. Cheyenne Jackson will play a prominent role in the second half of this season, and “AHS” veterans Taissa Farmiga and Finn Wittrock will soon make an appearance.

It’s time to find out what’s in store for us. Follow along with our liveblog and let us know what you think in the comments.

10:01 PM — So we open with a placard telling us that “My Roanoke Nightmare” was a massive hit and its season finale had even bigger ratings than the NFL, “Empire,” and “The Walking Dead.” Ha. In your dreams, Ryan Murphy.

10:03 PM —  Cheyenne Jackson plays Sydney, the stereotypical sleazeball TV producer, and like any sleazeball, he wants to give “My Roanoke Nightmare” a sequel. And what kind of sequel does he want? A sleazy reality show, of course! It’s called “Return To Roanoke: Three Days In Hell,” and it involves moving Matt, Shelby and Lee back into the Roanoke house with the actors who played them and film them with hidden cameras as the producers scare them with actors disguised as The Butcher. The network execs are convinced after some persuasion, but there’s one problem: Shelby, the real Shelby, doesn’t want to go back.

10:09 PM — The producer meets with Shelby, who says that she and Matt have separated and that they have both received death threats because of the show. Oh, and Shelby was caught by the tabloids sleeping with Dominic Banks … who is played by Cuba Gooding, Jr. Shelby slept with the actor that played Matt on the show!

It turns out that Shelby has agreed to do the show in the hopes that it will force Matt to hear her out. She agrees on the condition that Dominic doesn’t show up in Roanoke … so of course the producers are going to make sure that love triangle storyline shows up.

10:13 PM — The producers go prancing around the house in Roanoke as the crew shows off the booby traps they’ve set to scare the pants off of Matt and Shelby. Sydney reveals that the reason why he’s doing this show is to get Lee to confess that The Butcher story was a lie and that she killed her husband while in Roanoke. Then the crew calls him out to look at something they didn’t set up: a ring of dead piglets next to a tree.

Next, we meet Kathy Bates as Agnes, the actress who played The Butcher on the show. We see her beating out a bunch of younger actresses for the award as Agnes explains that she wanted to breathe life and sympathy into the role, even though its clear The Butcher just came off as a bloodthirsty ghost. Agnes does the usual spiel that any prestige actor would give, until Sydney reveals that Agnes was arrested for assault after she dressed up as the Butcher and attacked Hollywood tourists with a cleaver. It seems she’s become mentally unstable and obsessed with The Butcher. Sydney accuses her of setting up the piglets and hands her a restraining order barring her from the Roanoke house and the surrounding area. Agnes responds by cursing Sydney in her Butcher voice as they walk out.

10:25 PM -- Next we see Lee getting interviewed by E! News, where she says that she’s doing the show to prevent people from slandering her without her around to defend herself. We also learn that the actress who played her has fallen into alcoholism, which leads to a funny conversation between Sydney and a lawyer about how to get booze into the house without them being liable. Back at the house, The Butcher’s evil begins to take hold as a crew member is killed by a chainsaw in a freak accident. Sydney wants to keep going like nothing’s happened, but his co-producer, Diana, quits right on the spot. She turns on a video camera in the hopes that she can use it as evidence against whatever Sydney uses to slime her in the press, but the video ends up being her last testament as she is attacked by the Pig Mask Killer. A placard reveals that her tape was found, but her body was not.

10:34 PM — Next, we meet Audrey and Rory, the actors who played Shelby and Edward Mott. Audrey is British — very British — and Rory is a goofball. And they’re married. While they’re having a romantic moment, they see someone outside the window. That person attacks them, and they think it’s Agnes, who apparently has been attacking Audrey ever she beat Agnes out for a Saturn Award after doing the show.

After Sydney gives them phones to film everything in the house, Matt, Shelby and Lee reunite for the first time since doing the show. It’s not pretty. Lee explodes at Shelby for destroying both her and Matt’s lives, and Shelby is sick of having her mistakes held over her. Matt doesn’t want anything to do with either of them. Audrey taunts the woman she played as “fiery and pathetic, just like I played her.” Audrey doesn’t like Shelby, especially after she interpreted Shelby’s compliment to her about her marriage as an insult about her age.

The actors have a laugh about Matt’s story, saying that they never saw anything spooky while filming the show. Matt comes into the room and asks them when they filmed. They say it was during the summer. Matt points out the window and shows them that the Blood Moon is in the sky…and it’s almost full.

A placard tells us that Sydney’s show never made it to air, and that the footage being presented was pulled from archives. It also tells us that every person involved in the show died during filming…except one.

10:49 PM — We see some footage from the hidden cameras of the six victims — er, cast — going about their business. A man covered in gore and viscera passes in front of the camera, but no one sees it yet. Matt and Shelby meet in the basement. Shelby promises that nothing will happen this time with Sydney’s crew, but Matt seems pretty sure they are going to die this time. And that’s when Dominic shows up. Cue massive fistfight.

After the fight, Lee talks with the actress who played her about them both being alcoholics. Her actress blames her for her addiction, saying she became hooked on booze while playing Lee on the show. Lee says she has no one to blame but herself, saying that the show is the reason why everyone thinks she killed Mason. She didn’t have to play up Lee’s alcoholism. It was her choice to portray Lee the way she did.

We see Audrey in the shower when someone enters. It’s the Pig Mask Killer. Audrey runs down horrified and Rory storms up to find him. Instead, he finds the ghosts of the two nurses, who stabs him to death. Sorry, Evan Peters fangirls. That’s all you get of your boy this season.

The episode ends with Matt making a terrifying discovery: the “MURDER” sign spray-painted in the living room has been completed. Of course the nurses picked Rory to be killed. After all, his first name starts with ‘R.’

Next week, the actors begin to realize that their subjects were telling the truth, Matt and Shelby have a heart-to-heart, and Sydney gloats over his ratings, seemingly uncaring that one of his cast members just got his throat slashed. Here’s hoping The Butcher has a special cleaver with his name on it.

From “Texas Chainsaw Massacre” and “Saw,” to “Coven” and “Hotel,” the sixth season of “AHS” honors horror lore

"American Horror Story" has been known to reference plenty of horror movies in past seasons, but the sixth season of the anthology series adds something new to the callbacks. More than any other season, "American Horror Story Roanoke" has made numerous references to past "AHS" tales, all of which Ryan Murphy promises are hinting towards the series' entire mythos being woven together.