Caleb Kennedy, a teenage singer who competed on “American Idol” in 2021, has been charged with felony DUI following a deadly crash in Spartanburg County, South Carolina, according to local media reports.

The South Carolina Highway Patrol told WSPA-TV Kennedy crashed a 2011 Ford pickup truck into a workshop behind a home on Tuesday afternoon. A man inside the workshop suffered severe injuries and died after he was transported to an area hospital. 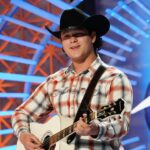 The crash occurred just after 12:00 p.m., the Pacolet Fire Department told the TV station. The victim was later identified by the Spartanburg County Coroner’s Office as 54-year-old Larry Duane Parris.

TMZ published pictures of the pickup lodged inside a badly-damaged shed that had been turned into a workshop.

Kennedy, 17, also suffered injuries in the crash. He was later charged with felony DUI resulting in death.

A native of Roebuck, South Carolina, Kennedy appeared on season 19 of “American Idol.” He made it to the top five, but exited the show in May 2021, after a video surfaced showing him seated next to an individual wearing what resembled a Ku Klux Klan hood. Kennedy was 12 years old at the time the video was recorded.

When the video went viral, Kennedy posted a statement on Instagram saying, “I was younger and did not think about the actions, but that’s not an excuse.”