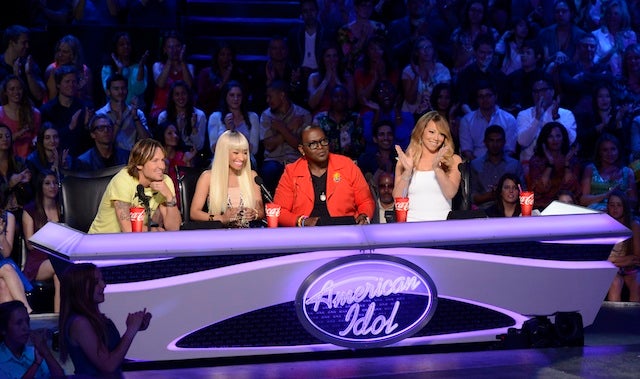 Fox's "American Idol" is having a really bad week. The network’s big revenue generator is showing signs of distress.

"The falloff has really been the last two years," Brad Adgate of media-buying firm Horizon Media told TheWrap. "You have to look at what's happened since then with the competition and the audience fatigue and the judges and the number of choices out there."

At its height in 2006, the show was attracting about 30 million viewers an episode. Compare that number to last week's results episode, which brought in 11.9 million total viewers and was beat in the key 18-49 demo by repeats of "The Big Bang Theory" – yes, reruns.

That blow casts a dark shadow on "Idol's" recovery from five consecutive weeks of Wednesday night key demo lows, a streak it finally pulled itself out of with its April 10 episode.

If the ratings woes weren't enough to worry network and show executives, add an explosive story about an alleged judges shuffle to the mix. On Tuesday, The Hollywood Reporter said that the show's producers had plotted to replace new judge Mariah Carey with former judge Jennifer Lopez. Insiders claim it was a desperate move to create buzz and curiosity among viewers in order to revive this season’s flagging ratings. But that plot was stopped dead in its tracks when the diva reportedly threatened litigation.

We're inclined to try and believe Fox. This is the kind of showbiz depravity that we like to believe doesn't really happen. But when hundreds of millions of dollars (and egos) are on the line, these are the lengths that producers can go to in order to stop (or at least slow) the bleeding.

As if this week wasn't already bad enough, NBC's "The Voice" celebrated a milestone – it beat "Idol" (and everyone else on the small screen) for the first time in both total viewers and the advertiser-coveted 18-49 demographic.

This, by the way, after "The Voice" took "Idol's" spot in the Emmy race last year: it replaced it among the nominees in the Outstanding Reality Competition category.

On the financial side, "Idol" has been and still is Fox's major breadwinner. Even with its declining ratings, the show brought in $836.4 million in ad revenue last year – more than $100 million more than 2011's take, according to Kantar Media

But, that doesn't mean Fox is content to stand back and watch its dominance go to that show with the spinning red chairs. It has way too much at stake.

This season, Fox charged $340,000 (versus $500,000 for Season 11) for a 30-second spot during the performance shows on Wednesday and $300,000 during Thursdays' results show, according to SNL Kagan. Those prices are usually generated by the previous season's sweeps ratings.

So, it's possible that if "Idol" doesn't deliver the promised eyeballs (or CPM, a measurement used in advertising to reflect an ad's reach), it will have to make them up. SNL Kagan analyst Deana Myers said, "Networks use make-goods [ad time in other time spots] to make up for the promised CPM to advertisers."

Since Season 12 is currently averaging 17.9 million (versus Season 11's 21.9 million), the timing of this decline – right before May sweeps – must have Fox shaking in its boots.

"It's been [Fox's] cash cow," Adgate says. "It puts pressure on them to come up with other hit shows, something that's going to pick up the slack, to remain competitive. They have relied on that show year in and year out. When fourth quarter would come to an end, they were fourth place for many seasons in adults 18-49. And then 'American Idol' would start and within a month or so they were tops in 18-49. Those days appear to be over. They have to bolster their overall lineup and don't be over reliant on 'American Idol.'"

Who knows? It may be scary enough to kick off its superstar new judge — midseason.