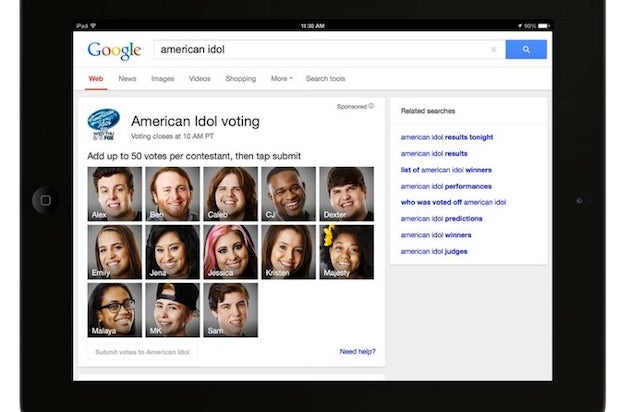 “Idol’s” first-of-its-kind partnerships with Google and Facebook will provide new ways for fans to engage.

The search engine will automatically offer the option to vote to anyone who’s searching “Idol”-related terms (see images above and below). This means that “Idol” now offers five ways to vote – Google Search, online at AmericanIdol.com; via the show’s app, text messaging and toll-free calling.

After voting, viewers will also be able to share their votes on social media, including on Google+, the ability to follow contenders, join in on conversations and Google Hangouts on the show.

The following day (Thursday’s elimination episode), Facebook joins the party. With the vote opening at the beginning of episodes now, “Idol” will present live voting stats and trends for the first time in its 13 seasons. Facebook will share real-time analysis of the East Coast votes, such as voting age (see image below) and contestant rankings. On-air, the producers can use the stats as part of the broadcast. It could even pull in participating fans’ Facebook profile pictures as part of the broadcast.

These new interactive deals are a part of the show’s renewed emphasis on its live shows. Fox and producers FremantleMedia North America and 19 Entertainment targeted the competition’s live shows as its focus for drawing viewers back into the show and cut the amount of episodes that were pre-taped in order to reach the show’s live episodes earlier in the season.

Its new executive production team has strong live event roots. Between them, they have directed or produced the Emmy Awards, MTV Video Music Awards and Divas Live, among their many other live event credits.

Last week, it premiered a whole new set with 360-degree capabilities, two stages and countless abilities for both grandeur and intimacy as the show’s producers and performers see fit.

“American Idol” airs Wednesday and Thursday at 8/7c on Fox.