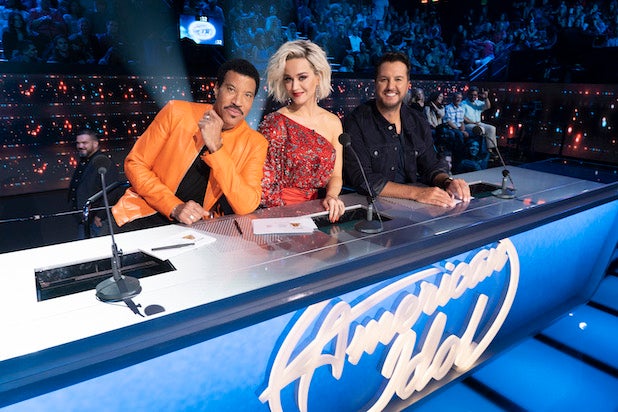 The “American Idol” revival has been renewed for a third season at ABC. The show’s second season — at least on its new home network — finale will air Sunday, May 19.

Offers have been made for host Ryan Seacrest and judges Katy Perry, Lionel Richie and Luke Bryan to return to the FremantleMedia North America-produced series, an individual with knowledge of the renewal tells TheWrap. While there is no word yet on if any or all of them will be back for the show’s third season, the insider tells us ABC is hoping for the team’s return.

The second season of the “Idol” revival, which premiered at midseason, is currently averaging a 1.7 rating in the advertiser-coveted adults 18-49 demographic and 8.9 million viewers, while Monday nights put up a 1.5 rating and 8.3 million viewers, according to the “most current” data from Nielsen, which includes a week’s worth of delayed viewing where available.

Also Read: 'Whiskey Cavalier' Canceled by ABC After One Season

“Idol” is not the first show to be renewed by ABC for the 2019-2020 season ahead of the network’s upfront presentation to advertisers Tuesday, with “Dancing with the Stars” and “The Bachelor” both having been renewed, for Seasons 28 and 24, respectively.

The network canceled “For the People,” “The Fix,” “The Kids Are Alright,” “Splitting Up Together,” “Speechless,” “Take Two” and “Whiskey Cavalier.”

Summer drama “Grande Hotel” has yet to premiere.

These are the new series that have been ordered by ABC for the 2019-20 season: “The Baker and The Beauty,” “Emergence,” “For Life,” “Mixed-ish,” “United We Fall” and an untitled Cobie Smulders project based on the “Stumptown” graphic novel series.