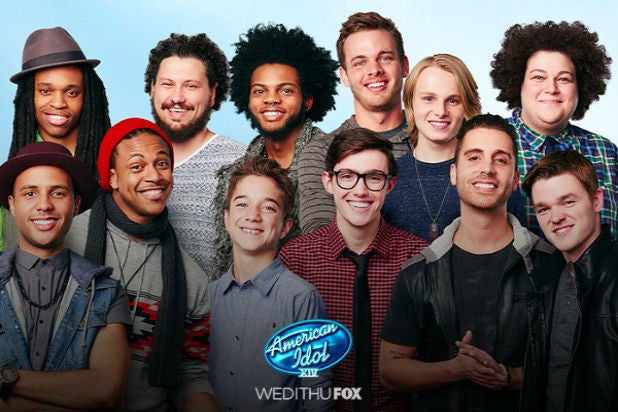 It was boys’ night on “American Idol” on Wednesday, as the Top 12 guys battled it out for the last eight remaining spots.

The hour-long episode went at roller-coaster speed with host Ryan Seacrest flying through his introductions of the aspiring stars during the live-performance phase.

One famous fan who definitely likes the new tone of the show is “Malcolm in the Middle” actor Frankie Muniz, who tweeted: “American Idol is fun again this year. Lots of great singers! Super in to it again!”

American Idol is fun again this year. Lots of great singers! Super in to it again! #idol

Adam Ezegelian caught the eye of judges Jennifer Lopez, Harry Connick, Jr. and Keith Urban when he performed Twisted Sister’s “I Wanna Rock.” While some thought the performance at the Fillmore in Detroit was over the top, actress Denise Richards tweeted during the show that she loved it.

Baby-faced Daniel Seavey won the hearts of fans at home, although we are not sure if they wanted to cuddle him or date him especially after the 15-year-old added a ukulele to his rendition of “I’m Yours” by Jason Mraz.

Riley Bria had such a familiar sound that Connick dubbed him “Keith Suburban” when he sang Eric Church’s “Homeboy.”

Mark Andrew dialed it in with his performance of “The Weight” by the Band. Meanwhile Trevor Douglas was just a barrel of energy pouring his infectious personality onto the stage with Gavin DeGraw’s “Best I Ever Had,” before telling Seacrest: “Stay awesome.” No, you stay awesome, Mark.

The two Qs — Qaasim Middleton and Quentin Alexander — both came out on top, with Lopez taking to Twitter following Alexander’s spellbinding performance of “I Put a Spell on You” by Screamin’ Jay Hawkins while wearing an equally as daring fur jacket.

Next up are the girls on Thursday night’s episode on Fox at 8 p.m.