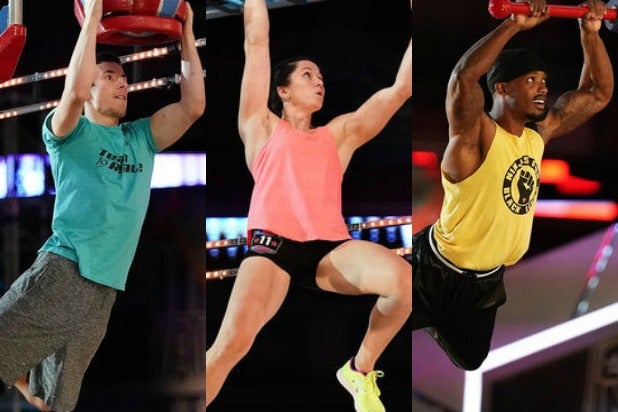 We’ve got our top American ninja from NBC’s “American Ninja Warrior” Season 12. Congrats to Daniel Gil, who conquered the Power Tower, the competition, and pocketed $100,000!

Before getting to the head-to-head race, Gil took on the 10-obstacle Finals course.

Below are official bios for all eight finalists, who were revealed midway through this evening’s finale episode, which was delayed 48 hours due to NBC News’ ongoing coverage of the 2020 presidential election. In all, 150 athletes competed for the title this season.

#AustinGray and @KingdomNinja_ are neck and neck on this final run, but who has what it takes to become the Champion? ⚡️ pic.twitter.com/i25UbNKVzG

Adam Rayl
Age: 26
Occupation: Artisan/Fabricator
Hometown/Resident: Glendale, Arizona
Arizona native Adam Rayl is a veteran Ninja Warrior, having competed on show consecutively since Season 8. While he credits his family, friends, fans, and the ninja community for his motivation — he lives for pushing limits and overcoming obstacles. In his free time, Rayl has committed to using his passion for the art of Ninja to mentor and support children in his community. Since his Season 8 debut, Rayl has cleared the city level competition, became a Vegas Finals qualifier, and cleared Stage 3.

Amir Malik
Age: 19
Occupation: Ninja Coach
Hometown/Resident: Essex Junction, Vermont
Amir “Sonic” Malik is the only new competitor to make it to the finals after a tremendous season. The Vermont native was born with Wolff-Parkinson-White (WPW) syndrome, a congenital condition where the heart has an extra electrical pathway. At Age 14, he received his final surgery allowing him to train and live out his dream of being an American Ninja Warrior. When he’s not training on one of his 10-self-made backyard obstacles, you can often find him in the kitchen practicing his cooking skills.

Austin Gray
Age: 23
Occupation: Professional Ninja/Ninja Coach
Hometown/Resident: Longmont, Colorado
Return competitor Austin Gray is back for his third season, after qualifying for Vegas in Season 10 and competing in Season 11. Prior to joining Season 10, Gray had just donated one of his kidneys to a lifelong friend who was in the middle of kidney failure. Since then, he has used the show as a platform to advocate for organ donation and now serves as a spokesperson for the National Kidney Foundation. Gray is known for his motto, “Share Your Spare” to encourage organ and kidney donation.

Daniel Gil
Age: 26
Occupation: Motivational Speaker
Hometown/Resident: Houston, Texas
Motivational speaker and five-time national “American Ninja Warrior” finalist, Daniel Gil, traverses the country talking to children and adults to help them understand their ability and reach their dreams. Daniel himself dreams of another shot a total victory after being a Stage 4 Vegas Finalist in Season 11. When he’s not speaking across the country or training for competitions, Daniel is working on his second children’s book in his “The Little Ninja’ series.

Jake Murray
Age: 32
Occupation: Full-time Ninja
Hometown/Resident: Golden, Colorado
Three-time Vegas Finalist, Jake Murray, is back for his sixth season, having competed on “Party Time” for three seasons. Often known by fans for his wild antics on and off the course, Murray set his old ways aside to bring competitive runs — launching him to snag the fastest time in this season’s Qualifiers. An avid skateboarder of over 18 years, you can find him cultivating his hobby of crafting tables, obstacle courses, and even cat towers.

Jesse Labreck
Age: 29
Occupation: Manager at Ultimate Ninjas
Hometown/Resident: North Aurora, Illinois
A lifelong athlete and return competitor, Jesse “Flex” Labreck, is back for her fifth season as a contestant on American Ninja Warrior. This season, she made history, becoming the first female competitor to hit five buzzers. But this isn’t the first record she has broken; during her inaugural season, Labreck was the first rookie ever to make it to the ninth obstacle. When she’s not training or coaching, the four-time Vegas finalist is running children’s classes to boost their self-confidence through fitness and the art of Ninja. A University of Maine alum, Labreck holds 11 school records and 15 American East Conference Gold Medals for the university’s track and field team. Labreck is engaged to former “American Ninja Warrior” contestant, Chris DiGangi.

Lucas Reale
Age: 21
Occupation: Ninja Coach
Hometown/Resident: Weymouth, Massachussets
As one of the youngest people to compete on “American Ninja Warrior” and now a two-time Vegas competitor, Lucas Reale, is his sister’s hero. The brother-sister duo became incredibly close after doctors found a brain tumor on Lucas’ sister. Since her diagnosis she has continually cheered her brother on. The now-veteran Ninja ran his first Stage 1 run on the third anniversary of his father’s passing. Since then, Reale competes with his father’s memory in his heart and with a tattoo of his father’s signature above it. When he’s not training or coaching, you can find him preparing to open up his own Ninja Gym, which will soon make him one of the youngest Ninja Gym owners in the country.

Najee Richardson
Age: 28
Occupation: Actor, Model, Motivational Speaker
Hometown/Resident: Philadelphia, Pennsylvania
Mental health advocate and return competitor, Najee Richardson, has battled with depression in the past but has used therapy and Ninja as a way to unlock the impossible. During his Season 11 run, Richardson was a Vegas Finalist — the furthest he has made it in the competition since joining in Season 7. Richardson was also featured on Season 2 of “American Ninja Warrior Jr.,” where he acted as a mentor to the younger generation. Apart from breaking the stigma around mental health, Najee lives with asthma and is a Brand Ambassador for the American Lung Association.