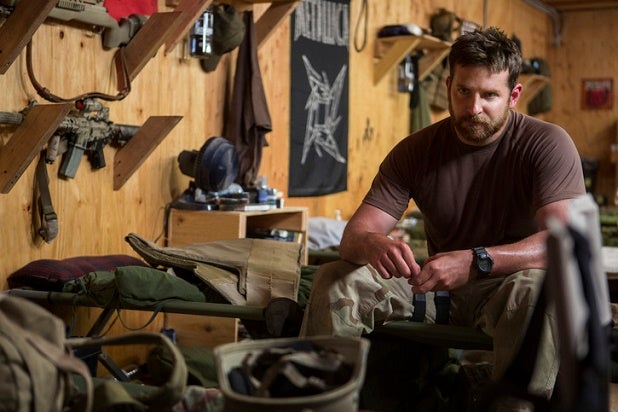 The Clint Eastwood-directed saga of a lethal marksman’s return from action starring Bradley Cooper has shattered the marks for biggest January opening ever, and on Sunday added an estimated $24 million to its haul.

That, along with strong debut showings by the family film “Paddington” and the Kevin Hart comedy “The Wedding Ringer,” enabled the weekend to obliterate the previous record of $231.5 million set in 2009 when “Paul Blart: Mall Cop” led the way.

With Heartland audiences turning out in force, “American Sniper” stunned analysts and even distributor Warner Bros., which had projected a four-day total between $50 million and $60 million. It averaged a stellar $29,662 from a market-high 3,555 theaters.

The premiums from showings on giant screens goosed the eye-popping grosses for “American Sniper.” The 348 Premium Large Format locations delivered $10.9 million and the 332 Imax theaters rang up an MLK-record $10.6 million. Together they accounted for roughly 20 percent of its haul.

It was easily the biggest opening of Eastwood’s career. In fact, the $49.8 million “American Sniper” took in Friday was bigger than the first-weekend total for any of his previous movies.

Among the MLK weekend marks that fell on its record-breaking rampage:

– Biggest three-day opening ever, topping the $41.5 million of “Ride Along” last year

Despite the dominating “American Sniper” debut, the Weinstein Company’s “Paddington” and Sony Pictures’ “The Wedding Ringer” both scored.

The family film from “Harry Potter” producer David Heyman got a boost from the kiddie crowd Sunday and wound up in second place with $25.2 million, providing a nice start for the new TWC-Dimension specialty label.

And “The Wedding Ringer,” which co-stars Josh Gad, topped its $23 million production budget and laughed its way to the best MLK weekend ever for an R-rated comedy with $24.5 million.

Not sharing in the holiday bounty was the weekend’s third wide opener “Blackhat.” Legendary Entertainment’s cyber thriller, directed and co-written by Michael Mann, took in $4.4 million. That’s about half of what analysts had projected for the R-rated Chris Hemsworth thriller, not what Legendary or distributor Universal Pictures had hoped to see, given the film’s $70 million production budget.