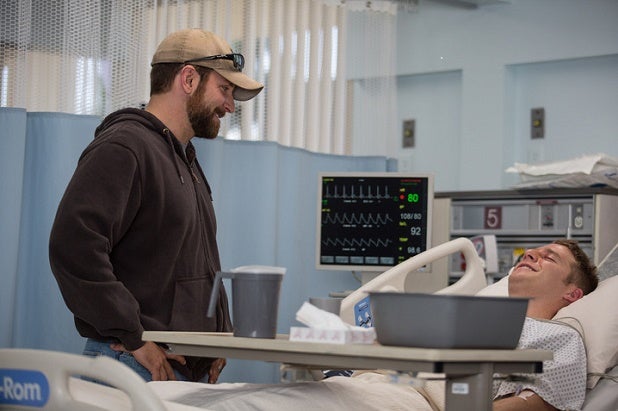 “American Sniper,” the haunting tale of a lethally accurate marksman coming home to his family a changed man, brought in a sizzling $5.3 million from preview shows Thursday night.

It was the beginning of a nationwide box-office barrage that is expected to net more than $50 million for the Clint Eastwood-directed Iraq War saga starring Bradley Cooper over a jammed Martin Luther King, Jr. holiday weekend for distributor Warner Bros., and set a new record for a January opening.

It appeared to have received an immediate and significant Oscar bump, as advance sales Thursday skyrocketed by an astronomical 234 percent from Wednesday at online ticket broker Fandango.

The preview showing by “American Sniper” blows away that of “Lone Survivor,” the Afghan War saga that took in $1.5 million in Thursday night screenings on the way to a $37.8 million debut for Universal Pictures last January. And it’s not that far from summer superhero-sized numbers; “X-Men: Days of Future Past” took in $8.1 million from Thursday shows as it headed to a $90 million first weekend for Fox in May.

Heartland audiences and military families are expected to turn out in force, Cooper and Eastwood both have significant fan followings and the Oscar nominations are sure to help, so “American Sniper” looks like a good bet to eclipse the $41.5 million three-day weekend record set by Universal’s “Ride Along” last year.

Multiplexes should be jammed over the four-day MLK weekend, as the new Oscar nominees take on three wide openers.

Sony’s R-rated Kevin Hart comedy “The Wedding Ringer” is projected to debut at around $22 million over the four days and and come in second. It brought in $800,000 from its early shows Thursday.

“Paddington,” The Weinstein Company’s family-friendly live-action/CGI take on the sweet British bear, is aiming for $17 million over the long weekend.

And “Blackhat,” the Legendary Pictures cyberthriller directed and co-written by Michael Mann, will be the year’s first flop if it comes in with the $10 million over the four days that the analysts project for distributor Universal. Starring Chris Hemsworth and Viola Davis, “Blackhat” brought in $179,000 on Thursday night.

Liam Neeson’s “Taken 3” was No. 1 last weekend and will be in the mix again for Fox, as will Paramount’s civil rights drama “Selma.”

The Best Picture Oscar nomination and MLK holiday should draw crowds to director Ava DuVernay’s chronicle of the 1965 Selma-to-Montgomery marches in Alabama, which is returning for its second week in wide release.