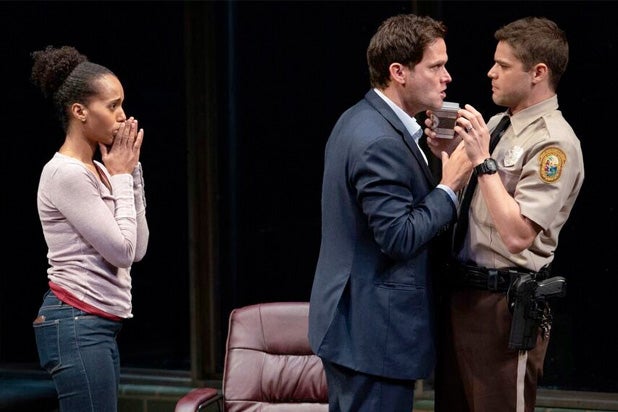 In life, there are seldom black-and-white villains. And that’s true of the flawed but relatable characters in Christopher Demos-Brown’s ripped-from-the-headlines drama “American Son,” which opened Sunday in a polished and starry Broadway production.

Kerry Washington, who’s become a bigger star on “Scandal” since her Broadway debut in David Mamet’s “Race” nearly a decade ago, plays the mother of a just-turned-18-year-old boy who hasn’t returned home but whose car has turned up in the police system. By turns worried, frustrated and angry, this PhD-holding college professor confronts the rookie Miami cop (Jeremy Jordan) in the precinct waiting room.

Officer Larkin is the sort of young Southern white male who doesn’t know Charles Dickens from Emily Dickinson and seems as prone to microaggressions as he is to eating donuts. But he’s just an overnight-shift underling following “protocol,” waiting for a more senior officer to turn up for his early morning shift.

Washington’s Kendra has cause for concern. Her son, Jamal, may be bound for West Point in the fall after attending good (mostly white) suburban schools, but he’s also a 6-foot-2 African American male with cornrows — who was apparently pulled over by the cops late at night driving the second-hand Lexus registered in his father’s name.

The issue of race — and the fate of young African American men like Philando Castile, Eric Garner and Tamir Rice at the hands of the police — is never far from Kendra’s mind. Nor apparently from young Officer Larkin’s, as he seems incredulous that Jamal isn’t in the system for some even minor offense and later complains that Kendra “went from zero to ghetto” in no time at all.

Unfortunately, the badge-wearing FBI agent to whom he confides this turns out to be Scott (Steven Pasquale), Kendra’s recently estranged husband and Jamal’s father. This escalates the tension — especially as dad learns more about his son’s recent troubles since Kendra and Scott split up (and Jamal’s decision to put a “Shoot cops with your phone whenever they make a bust” bumper sticker on the Lexus).

Washington and Pasquale present a convincing portrait of squabbling exes — she even chides him on his use of “white trash” slang. Just when you begin to wonder whatever brought them together in the first place, they begin reminiscing about their shared affinity for hard work, respecting their elders, Thai food and Thelonious Monk. (Really, classic jazz?)

When an African American lieutenant (Eugene Lee, terrifically forceful) arrives to take charge of the situation, the drama kicks into overdrive. We also see new shades of black, and blue, in the issue of race and policing. Lee’s Lt. Stokes is a by-the-book, seen-at-all type whose advice to black men pulled over is “shut up and do what I say.” (He also recoils at the suggestion that he’s an Uncle Tom.)

In her first stage role in nearly a decade, Washington is a revelation. Dressed in a cardigan and jeans, she is the portrait of a woman who is one increasingly raw nerve ending, struggling to maintain her hard-won, much-prized composure as circumstances make that increasingly difficult.

Director Kenny Leon keeps the action taut during the 90-minute running time, perhaps too taut. There isn’t much breathing room in the production — and the ending is so abrupt that it’s a wonder the curtain drop doesn’t give the actors whiplash. This is the rare show that would benefit from a longer running time, from more scenes exploring the characters in greater depth.

There are other issues, too. Despite the best efforts of his talented cast, too often the characters can seem like mouthpieces for different points of view in a plot jerry-rigged in ways that don’t always ring true. For instance, it’s hard to swallow that Pasquale’s FBI agent is the one who majorly loses his cool at the show’s climax — or that he hasn’t considered, let alone discussed, some of the issues of rearing a biracial son in modern America until this fateful night.

Still, it’s bracing to see a new American play grappling with serious, timely issues in a thoughtful way. It may take the star power of Kerry Washington (and producers like Shonda Rhimes, Jada Pinkett Smith, Dwayne Wade and Gabrielle Union-Wade), but even Broadway can get woke.