American adults now spend 6.3 hours on digital media per day across mobile, their computers, and other devices like tablets — up from 5.9 hours per day on average at the same time last year. according to Silicon Valley venture capitalist Mary Meeker.

Also in Meeker’s annual Internet Trends Report, which was released on Tuesday morning at Code Conference in Scottsdale, Arizona, it says that mobile takes the lion’s share of Americans’ attention, with them spending more than 3.6 hours per day on their phones. 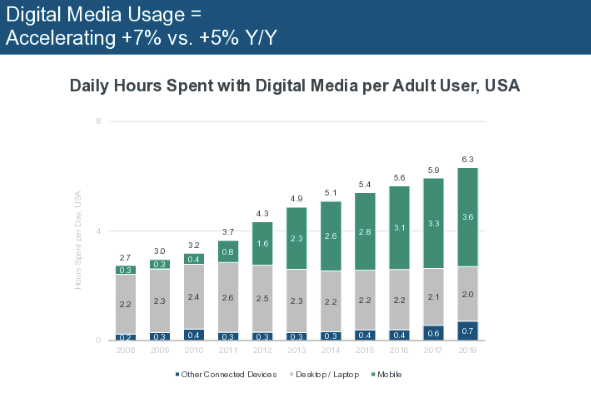 While time spent with digital media is accelerating, global internet growth slowed to 6% year-over-year in 2018, according to the report. Still, that growth pushed global internet usage to 3.8 billion people or slightly more than half of the world’s population.

The report — which contains 333 slides this year — had plenty of other interesting points. Here are a few that stood out:

— Stricter U.S. immigration laws could hit Silicon Valley especially hard, according to the report. About 60% of “most highly valued tech companies” have been founded by first and second generation immigrants, it found. “Immigration = Important USA Technology Leadership,” the report said. It did not differentiate between legal and undocumented immigrants for its breakdown of tech leadership.

— Podcasts continue to rapidly grow: 700 million people listen to podcasts each month, a 100% increase from four years ago. The most popular Apple podcasts last year, per the report, were “The Daily” from The New York Times, followed by comedian Joe Rogan’s podcast. 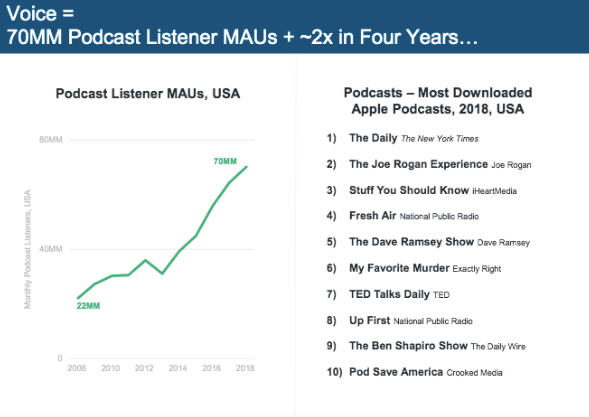 — “Fortnite” is dominant. The wildly popular video game now has 250 million players across the globe, up 100% from the same time last year.

To check out the full report, you can head here.