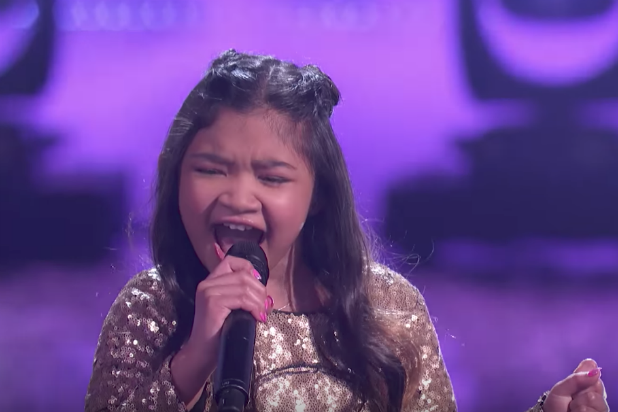 Angelica Hale at the "America's Got Talent" Season 12 finale

It all comes down to this, as NBC’s “America’s Got Talent” reveals its Season 12 winner tonight, with Angelica Hale among the 10 contestants still in the mix. Can the 10-year-old singer pull off the big victory?

Hale, who belted out “Symphony” as her final song on Tuesday’s episode, told TheWrap that it’s “unbelievable” that she’s gotten this far, adding that she’s “a bit nervous.”

As to whether she has a chance at hearing her name announced as the champion, Hale said, “I am hoping so, but I don’t want to expect to win because I want to have low expectations. But I think that maybe I do, and it all depends on America voting, so I hope they vote for me.”

The Atlanta native pointed out that she was able to maintain confidence heading into her final number: “The night before my performance, I knew, ‘I can do this.’ I was actually not that nervous at all, and  I went out there and did my best, and I think it worked. I was so happy afterward. I was like, ‘Yes!'”

One of the highlights of Tuesday’s episode for the young vocalist was getting a special off-camera message from judge Simon Cowell.

“After my performance, I was so happy that Simon came up to me and shook my hand — it was so amazing interacting with the judges and getting to know them,” she said. “He said I did really good, and he said it was the best so far.”

According to Hale, the toughest part of the show has been enduring the results episodes, as she points out that “just waiting there for your name to be called is very nerve-racking.”

If everything works out for her and she wins the million-dollar prize, how will she react?

“I think it will end with me on the floor, crying,” Hale said. “I will just be so happy. Wow, it would just be like me getting the golden buzzer back in the judge cuts, except even better!”

“America’s Got Talent” airs its Season 12 finale tonight at 8/7c on NBC.