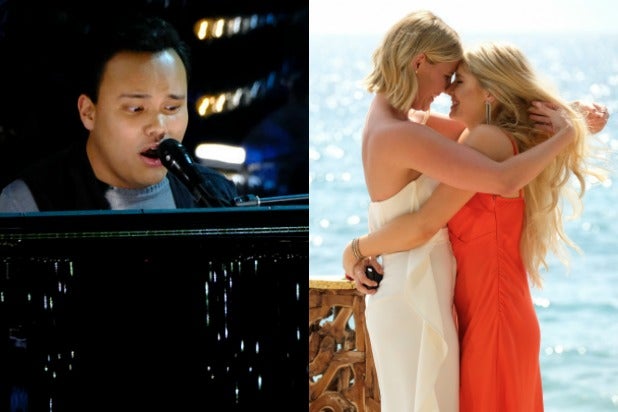 NBC’s “America’s Got Talent” performance finale was Tuesday’s top show. Unfortunately, the same network’s “Bring the Funny” season finale was not No. 2, and NBC ended up in a first-place ratings tie with ABC, which only aired its “Bachelor in Paradise” season finale.

In terms of total viewers, last night’s primetime Nielsen averages weren’t all that close — and ABC wasn’t even runner-up by that metric.

NBC and ABC tied first in ratings, both with a 1.3 rating/7 share in the advertiser-coveted 18-49 demographic, according to preliminary numbers. NBC was first in total viewers with 7.7 million, ABC was third with 4.4 million.

As ABC aired “Bachelor in Paradise” over all three of its primetime hours, that 1.3 rating/7 share and 4.4 million total viewers can all be credited to the reality dating show.

CBS and Univision tied for third in ratings, both with a 0.5/3. CBS was second in total viewers with 4.8 million, Univision was fifth with 1.4 million.

Also Read: 'The Bachelorette' Is the Only Show Up in TV Ratings This Summer vs Last

CBS and Fox both aired all reruns last night. Wise.