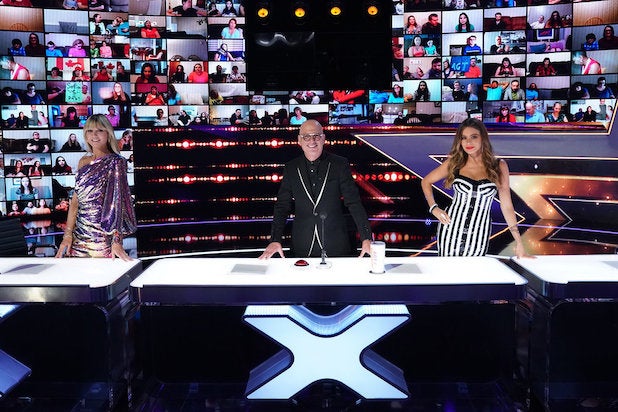 (Spoiler alert: Do not read this post if you do not want to know who won Season 15 of “America’s Got Talent.” But also, why did you click on it?)

“America’s Got Talent” has crowned its Season 15 winner: Congratulations to Brandon Leake!

Format creator Simon Cowell has been absent from “America’s Got Talent” since breaking his back in August in an electric-bike accident.

Also Read: Chris McCumber to Exit as USA Network and Syfy President Amid Next Wave of NBCU Reorg

“America’s Got Talent” was created by Cowell and is co-produced by Fremantle and Syco Entertainment. Cowell, Sam Donnelly, Jason Raff, Trish Kinane and Richard Wallace are the executive producers.

Auditions for the next season of “America’s Got Talent” are currently underway.

Below are the official bios of the 10 “AGT” Season 15 finalists, as provided by NBC.

Alan Silva
Alan J Silva was born in Brazil and comes from a long line of performers, in fact, he is the sixth generation of circus performers in his family. He started performing at the age of six. He trained and performed in many circus disciplines including Russian bar, clowning, tumbling, and flying trapeze but it wasn’t until he was sixteen that he found his true passion, the aerial silks. Soon after mastering his craft, he was traveling around Brazil performing as the first male artist on aerial silks for circuses and festivals. In 2000, he had the opportunity to audition for his dream circus that only accepted the very best artists to be a part of the company. Two years after his audition, he was called upon to create a character and act for a show that would eventually open on the Las Vegas strip. Since 2003 Alan has called the USA home and proudly received his citizenship in 2017. Whilst working and living in Las Vegas, he met and married his wife and they are now parents of two young children that may follow in his footsteps.

Archie Williams
59-year-old Archie is a singer from Baton Rouge, Louisiana, who spent 37 years in prison for a crime he did not commit.

On April 21, 1983 at the age of 22, Archie was sentenced to life without parole. In 1995, the Innocence Project got involved in Archie’s case and for over 20 years fought to have DNA run through the FBI Database.

On March 14, 2019, this request was finally granted and within hours proved that Archie was innocent. Seven days later on March 21, 2019, the charges were dismissed and he was freed.

During his time in prison, Archie turned to music. He was part of the prison choir and formed a band with his fellow inmates. “When I sang people would come to listen” Archie said, “They loved it and wanted to hear me. It brought me joy.”

At Archie’s “AGT” audition, he performed, “Don’t Let The Sun Go Down on Me” by Elton John an audition that Simon Cowell said he would never ever forget.

BAD Salsa
BAD (Bivash Academy of Dance) Salsa, members Sonali Majumder and Sumanth Maroju from India are the winners of “India’s Got Talent” Season 4. Under the direction and mentorship of Bivash Chowdhury, the creator of the brand BAD Salsa, Sonali and Sumanth have participated in more than a thousand national and international events worldwide, receiving recognition and earning several awards in the world of dance. Coming from humble beginnings in small towns in India, Sonali and Sumanth are excited and honored to have made it to the Live Shows of “America’s Got Talent.” With their spine-chilling lifts and fast paced moves fused with the flair of the beautiful culture of India, BAD Salsa promises to show some innovative and unique creations that the world has never seen before!

Bello Sisters
Loren aged 22, Celine aged 19 and Joline aged 14 are three Italian-German sisters who perform as an acrobatic trio act. They come from an illustrious line of circus performers, their father performed in Cirque du Soleil for 12 years, and their mother was the first woman to walk a high wire with stilts. Training started from a young age, but these three sisters joined forces to create their trio just three years ago. The dream for these sisters is to have their own Bello Family Show in Las Vegas.

Brandon Leake
Brandon Leake is an award-winning Spoken Word Poet, Artistic Educator and Motivational Speaker from Stockton, California. His creative mixture of art, charisma, and passion tailored to his own unique personal narrative has taken him across the world as a speaker and performer.

Performing in locations such as New Zealand, Mexico, Canada, and 36 states around the country for his, “Dark Side Tour” which promoted his first ever published poetry chapbook and his crown jewel “Deficients: A Tale From My Dark Side”. Brandon is also the founder and CEO of Called To Move – CTM an artistry organization with the pursuit of aiding youth development through the art of poetry. This pursuit has led to Brandon leading workshops around the world with several curriculums he has developed himself – in particular, teaching youth in his hometown of Stockton, California.

Broken Roots
Austin is a popular country musician who plays all over the Chicago-land area. Joey, a popular rock/pop musician who also plays all over the Chicago-land area. In 2019, Austin and Joey were being told repeatedly by venues and people that followed both musicians that they should perform together. They finally met at one of Joey’s shows and realized they actually had many things in common – both worked in law enforcement and cancer had affected their lives in devastating ways. They struggled with their decision to come together musically, both wanting to support each other but feeling like their styles were too different to work together. They eventually decided to break their musical roots and give it a shot by joining forces as a duo on “America’s Got Talent.” Their audition received a standing ovation, four yeses from the judges and they immediately felt the good that can come from courage, sacrifice and compromise in the face of challenge.

Cristina Rae
Cristina Rae wowed the audience with her phenomenal performance of, “Gimme Shelter” which earned her Heidi Klum’s Golden Buzzer. An arts and biology major, Ms. Rae has been tirelessly pursuing a career in entertainment while working as a body sculptor – though her the role as mother to 4-year-old son Jeremiah gives her the most pride and joy!

As a single mother, Cristina has been through her fair share of hardships, which at times, has left her to experience homelessness. Nevertheless, Christina’s brilliance, resilience, and love for her son keeps her heart and eyes set on the ultimate prize, a home to call their own and a successful career as a vocalist!

Daneliya Tuleshova
Daneliya is a 14-year-old singer from Kazakhstan. She lives with her parents, brother, sister, two hamsters (Vanya, Turbo), dog (Mimi), two cats (Zhasmin, Smo) and her fish. She began singing when she was 10 years old, performing during dinner for her family. In addition to singing, Daneliya enjoys school, reading, cooking pancakes, playing with her best friends and watching American shows on Netflix but her favorite activity is posting dance videos on TikTok. Daneliya has watched “America’s Got Talent” for many years and dreamed of one day being able to come to America and perform on the “AGT” stage. She never thought it would be possible, so this all still feels like a dream. One day, she hopes to be just as big as her inspiration, Beyonce.

Kenandi Dodds
15-year-old Kenadi Dodds is a country music singer and songwriter. At the age of nine she went to her first Shania Twain concert and has dreamed of being a country singer ever since. She is inspired everyday by her parents, who are both blind and two younger sisters to pursue this career path.

Her father a two-time Paralympian is helping her navigate this path, teaching her the importance of hard work, perseverance and together learning about the music industry and developing her talents. Kenadi is determined to bring love and positivity to the world through her music.

Born in 2009 into a musical family, Roberta began singing at the age of three alongside her father, Alessandro Battaglia and together the duo have performed at local shows, galas and notable charity events. A second-generation Italian Canadian, Roberta is fluent in both English and Italian and performs a diverse repertoire of music in both languages ranging from ballads to up tempo pop. She has studied singing at a prestigious music academy and performed in competitions and shows including, Idea City presented by television mogul, Moses Znaimer as well as Toronto’s Breakfast Television where her rendition of Lady Gaga’s “Shallow” went viral, resulting in over two million views in two weeks – an outstanding accomplishment for a nine-year-old.

Roberta recently launched her own charitable initiative designing bracelets and donating 100% of the sales to Toronto’s world-renowned SickKids Hospital. “It’s about kids helping kids,” explains the philanthropic artist. “I just want to see people smile. I love making everyone happy.”