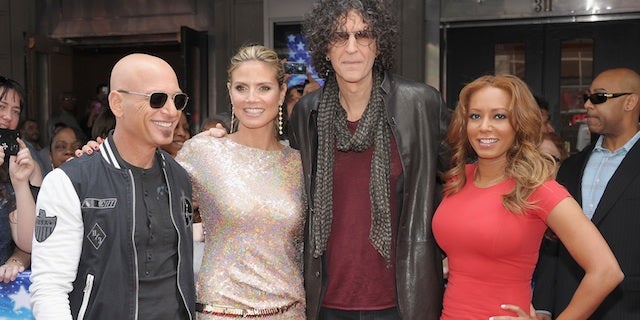 New "America’s Got Talent" judges Heidi Klum and Mel B. faced the press at NBCU's Summer Press Day in Pasadena on Monday. How are they doing in the new gig?

They seem to be getting along really well with returning judges Howard Stern and Howie Mandel, who says that when Mel B. makes a decision, there's no dissuading her – even if the audience boos her as reported in the judge's first days on the job.

"Who hasn’t been booed?" Mel B. said of the local crowd’s propensity to boo when someone doesn’t get through the auditions.

"They boo everybody," Klum interjected. "Honestly, [the press] needed something to write about."

Aside from the new four-person judging panel, fans can expect a few slight changes on the upcoming eighth season. The first change comes as a side affect of having a four judges and voting performers through.

If the judges’ votes are split – two and two – then the contestant won’t move on in the competition. It has to be three and one or an unanimous vote.

Mandel said that aside from having “more opinions, more critiques,” there is going to be what he referred to as “the fifth judge.”

“We’re sending contestants to the Mecca of entertainment, Radio City Music Hall,” he said about the production’s move back to New York City.

Additionally, executive producer Sam Donnelly said they’ll be using some new production techniques. "We’re doing some interesting things," she said. “We're going to make some changes around storytelling. We get to see [the judges] in more candid moments. They don’t even know this. We shot a lot of footage of them.”

She also mentioned that they’ll follow contestants more intimately and tell their back-stories in a new way.

Finally, Stern says he speaks for the entire panel when he says, "This year, I really want to find an international superstar. Someone who can really break through."