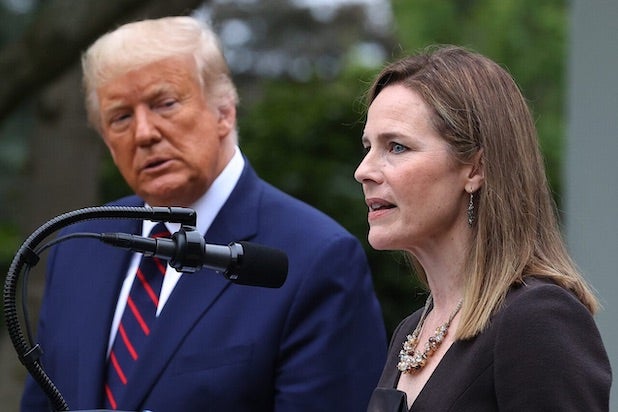 President Trump nominated Amy Coney Barrett to replace the late Ruth Bader Ginsburg on the U.S. Supreme Court on Saturday, and Hollywood liberals were not happy about it.

Cher tweeted her discontent about Barrett, calling her a “neocon judge” and fearing for the fate of Roe vs. Wade.

“SICK CHILDREN WILL SUFFER BECAUSE MEDICINES TOO EXPENSIVE,” wrote the singer, adding “IF PPL DONT [sic] GET TREATMENT THEY DIE.”

“Elections are won by margins and there will be people who Vote against Trump and Republicans because they remember their mom, sisters and friends who died from back alley abortions,” the “Escape at Dannemora” star wrote.

“Do you think they tried very hard to get Donald to read anything about #AmyConeyBarrett, or did they just say, ‘We found a lady Mike Pence’ during a commercial break on OANN?” she wrote.

“One Day at a Time” star Valerie Bertinelli responded to a video of Florida Senator Marco Rubio joining many conservatives in complaining that disapproval over Barret’s nomination is due to an “assault on Catholicism,” calling him a “hypocritical idiot” and reminding him that Joe Biden is also Catholic.

“The penalty for going back on your word not to confirm a SCOTUS nominee during an election year will be loss of your Senate seat. I’m looking right at you, Lindsey Graham and Susan Collins,” he wrote.

RBG overcame enormous obstacles just to become a lawyer, and then argued many gender discrimination cases before the Supreme Court, winning most of them. Amy Barrett has worked very hard to advance her own career but doesn't seem to have done anything to help other people

Joe Biden is Catholic. I'm voting for him. My grandmother was Catholic. She was an amazing person and I loved her very much.

Amy Barrett is a patriarchal puppet who weaponizes her Catholicism in an effort to oppress women, people of color, and the LGBT community.

Here’s The Plan:
1. Appoint Amy Barrett
2. Appoint her husband
3. As each justice dies, appoint one of her 7 children to take their place
4. Supreme Court declares rest of government unconstitutional
5. Catholic Monarchy under the House of Barrett

Two years ago, I tried to talk to the last SC justice during confirmation. I wanted to discuss gun safety, he refused. Amy Barrett is worse. She has already said she believes violent felons should have guns. Fight this nomination as if your life depends on it. It does. pic.twitter.com/nr8nlmxCsY