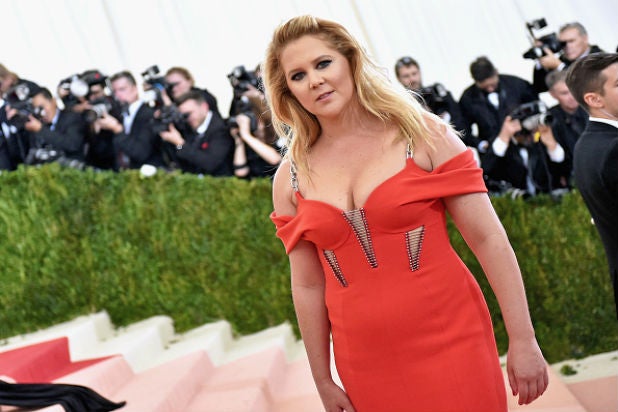 Amy Schumer has dropped out of Sony’s live-action “Barbie” due to scheduling conflicts, TheWrap has learned.

In December, it was announced the comedian would play Mattel’s iconic doll in a movie that will follow the title character as she gets kicked out of Barbieland for not being perfect enough and ends up in the real world. The PG-rated movie was expected to hit theaters in the summer of 2018.

Production for the big screen adaptation was expected to start this summer. A director is not yet attached to the project.

Hilary Winston came up with the story and wrote the screenplay, but Schumer and her sister, Kim Caramele, recently rewrote the draft. However, Schumer is not writing another draft of the script due to her exit from the project.

Walter F. Parkes and Laurie MacDonald headed the 2014 deal with Mattel to secure the intellectual property, and the two will produce the film along with Amy Pascal.

The Barbie line of toys has racked up worldwide sales of $3 billion since Mattel introduced the first doll in 1959. Barbie has been sold in styles representing more than 180 careers and, this year, Mattel announced that it will introduce new body types and skin tones to make the dolls more representative of America.

Schumer’s casting as Barbie sparked fat-shaming backlash following the announcement. “If Barbie became obese and heinous to men, Amy Schumer is perfect,” tweeted one user, while another wrote, “Better lose a lot of weight for that role!”

The actress will next star in the action-comedy “Snatched” alongside Goldie Hawn, which will open on May 12. She also has “Thank You For Your Service” opening in October.

Schumer is represented by UTA, managed by Guy Oseary at Maverick and Carrie Byalick at B. Her lawyer is Issac Dunham of Schreck Rose Dapello & Adams. Sony SVP of production Lauren Abrahams will oversee the project for the studio.