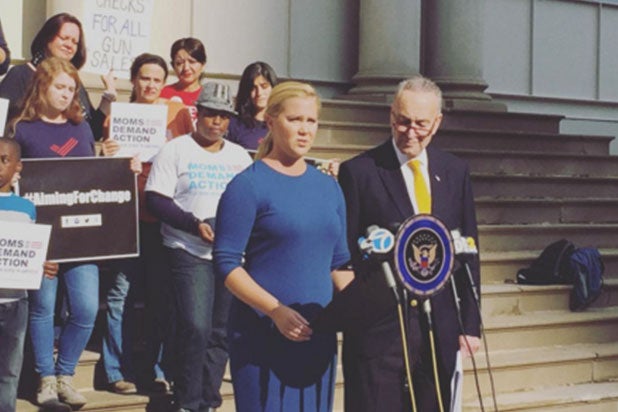 Amy Schumer is continuing to fight against gun violence, a cause she first took up after a gunman opened fire during a screening of her movie “Trainwreck” in Louisiana in July.

Schumer appeared with her cousin, New York Sen. Chuck Schumer, at NYC’s City Hall on Sunday to continue their “crusade on guns,” and the actress took to social media to reinforce her push for reform.

“Please join me and @SenSchumer in ending gun violence and tweet the hashtag #aimingforchange RT we can do this,” Schumer wrote alongside a photo with the politician.

According to an infographic, Sen. Schumer proposes to “close background check loopholes,” to “stop allowing criminals to avoid background checks at gun shows and online.” Other points in his plan include making “background checks better,” and shutting “down the Illegal Gun Pipeline.”

“#aimingforchange use this hashtag, please write your congress people. We need a public outcry,” the star wrote. “There have been 100 shootings since Lafayette.”

The comedian first united with her cousin in August after a gunman opened fire at a screening of her movie “Trainwreck” in Louisiana in July.

“I’m not sure why this man chose my movie to end those two lives and injure nine others, but it was very personal for me,” Schumer had said. “We always find out how the shooter got their gun and it’s always something that never should have happened in the first place.”

The comedian and senator also asked the U.S. Department of Justice to write a comprehensive report comparing all states’ standards for involuntary mental health commitment and urged the DOJ to give federal recommendations for best practices.

Please join me and @SenSchumer in ending gun violence and tweet the hashtag #aimingforchange RT we can do this pic.twitter.com/kfeeFAItKh

#aimingforchange use this hashtag please write your congress people. We need a public outcry. There have been 100 shootings since Lafayette