The mainstream embrace of ABC’s “Ugly Betty” and The CW’s “Jane the Virgin” will hopefully mean that the charming and hilarious telenovela satire “Ana Maria in Novela Land” can find a larger audience beyond the Latino movie ghetto. Starring Edy Ganem (“Devious Maids”) in what should be a star-making turn as both schlubby millennial Ana Maria and hyper-glamorous “gold-digging orphan/whore” Ariana (the protagonist of the fictional “Pasión Sin Limites,” or “Passion Without Limits”), this switching-places comedy warmly and trenchantly sends up the telenovela genre’s swooning melodrama and oversexed-but-prudish contradictions.

“Novela Land” begins with a flawless spoof, in which the moody but impassioned Ariana is caught in bed by her fiancé with his son. There’s the expected shouting and cursing, but then a twist: padre and hijo transform into zombies — a fate that might doom a lesser woman, but not the resourceful Ariana, who defends herself (rather implausibly, and yet totally believably) with a bouquet of roses. After she knocks the two out, she slowly adjusts her bra, reminding the viewers what’s really important: Hellooooo!, she’s got boobs!

It’s disappointingly unclear what keeps Ana Maria glued to the TV or writing fanfiction like the above scene, though her dedication to live-tweeting every episode of “Pasión Sin Limites” — and her corollary disinterest in employment — is entirely convincing. It’s not too long before Ana Maria, sitting in her living room with her parents (Nestor Serrano and the late Elizabeth Peña), magically trades universes with Ariana, who’s tamping down her lust for the hunky Armando (Michael Steger) to stomach marrying his father Eduardo (Juan Pablo Gamboa), all while being blackmailed by her conniving lawyer (Luis Guzmán).

I’m partial to identity-swap storylines anyway, but “Novela Land” is particularly delightful in its first half because director and co-writer Georgina Riedel (“How the Garcia Girls Spent Their Summer”) uses the tried-and-true format to poke fun at the simultaneously unhinged and starched-collars-and-manners world of telenovelas from a modern, feminist point of view.

When Ana Maria first finds herself in “Pasión Sin Limites,” she concludes she’s having a sex dream and seduces Armando to her bed, whispering conspiratorially to herself, “Sí, se puede!” (the Spanish translation of Obama’s “Yes, we can”). She wears highly visible bras, since Ariana’s barely-there negligees are seemingly the telenovela character’s only clothes other than ball gowns and her ribbon-choked wedding dress. It’s just a matter of time until Ana Maria’s modernity unsettles the people around her. Asks her concerned fiancé, “Is it the brain tumor again?” 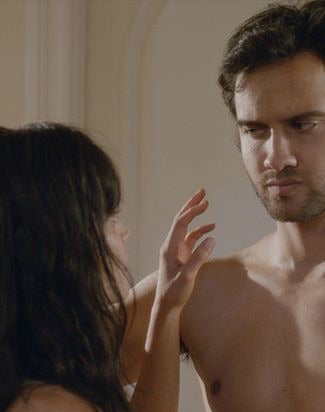 But the telenovela characters aren’t just there to be laughed at; Armando, especially, fights for some gravitas as a young son indignant that his future stepmother would cheat on his father, even if it is with him. (Steger actually manages to sell this complaint, while also playing Ariana’s dorky but strangely perfect love interest in Ana Maria’s world). Similarly demanding to be taken seriously is the perpetually fainting Ariana, whom Ana Maria’s parents suppose to be their daughter suffering a bout of insomnia. The film has the most fun with her, whom Ganem plays with her back arched like a rainbow and her breasts hoisted up practically right under her neck.

An even better sight gag (in a film full of them, most rather inspired) is Ariana’s “escape” from Ana Maria’s parents (whom she believes to be her kidnappers). She runs through the streets with her arms thrashing so wildly they could be tassels on a stripper’s pasties. And yet, she achieves surprising poignancy when she inadvertently makes up with Ana Maria’s semi-estranged sister (Mercedes Mason) in her doppelganger’s stead. “I promise never, ever to sleep with your husband, even though normally that’s what sisters do,” Ariana declares, meaning every word.

Most movies about trading places can’t sustain the goofy elation and absurd wit of their earlier scenes when the characters eventually tire of their new identities and are ready to go home. “Novela Land” unfortunately plummets downhill faster than the rest; not even Ganem’s spirited and pitch-perfect performance as the dual leads can carry Riedel and Jose Nestor Marquez’s spottily developed script through the film’s second half. It’s not quite clear what genre-required lessons Ana Maria and Ariana are supposed to take home with them after their exploits are over, especially since we’re never quite sure what specifically was so flawed about them in the first place.

But “Novela Land” is so gleeful and clever in its opening scenes that it’s destined to become at the very least a slumber-party classic. And if everyone falls asleep before Ariana and Ana Maria switch back, so much the better. We should all get to enjoy our adventures without having to think of returning home.