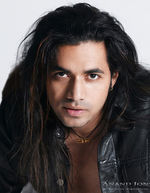 In the end, Anand Jon, the former fashion designer,  did not testify on his own behalf at  trial for the rape of nine models, despite all his protestations that he wanted to do so. His mother, Shashi, did not testify as expected. His sister, Sanjana, did not testify as expected. His brother-in-law, friends like Marla Maples, acquaintances – no one who knew Anand Jon and his life as a sexually obsessed climber with a taste for young fashion flesh, testified for him. Instead, the defense called a Santa Barbara district attorney, some cops and one very potent witness: Alicia Hanon,  the supervisor at a Radio Shack in San Luis Obispo.
Hanon testified that she felt compelled to come forward because she overheard one of her employees, Britney O., talking on the phone about the trial. Britney O. told friends that she was hoping to get her father’s house out of foreclosure in the wake of Jon’s trial, and was heard to say: “We have to get our stories straight.” As mentioned earlier, Britney O. wasn’t terribly credible before Hanon testified.
The defense is apparently convinced that the prosecution hasn’t made its case. But some pretty heinous behavior has been alleged from the stand in this six-week trial. In her closing statement, Assistant D.A. Mara McIlvain used a power-point presentation to drive home the youth of the alleged victims, their innocence and expectation, contrasted with Jon’s penchant for barely-legal porn, which she projected onto a screen for the jury.
The defense took four hours to wrap it up, with all three defense lawyers taking a whack at destroying the credibility of accusing witnesses. Leonard Levine delivered a rousing oratory: “These witnesses lied to you, and they lied to the court,” he said.
He noted that the prosecution based its case almost entirely on oral testimony. There was no physical evidence to back up the stories of rape. And he accused the detectives involved of failing to find the holes in the witnesses’ stories (this is demonstrably true), and of taking their stories at face value.
The jury is meant to begin weighing the case on Monday. Right now, it seems impossible to call this thing. Jon’s decision not to testify denied him a chance to create a sympathetic rapport with the jury. Some of the victims were credible, but not all of them were. Will this taint the whole enterprise? A jury is likely to want to punish Jon somehow, for something. But it will be hard to dismiss some witnesses as gold-diggers, or publicity hunters, while accepting others as legitimate.
This case that may never satisfy those of us who like clear answers – heroes and villains, and the satisfying thud of an obvious verdict. Let's wish the jury good luck.
With so many victims and so much evidence, I’m hearing it could be a couple of weeks before there’s a verdict.