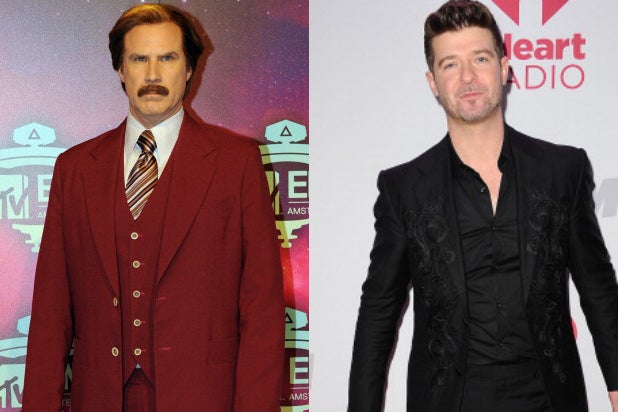 Ron Burgundy takes a backseat to no man — unless that man is Robin Thicke and the project is a “Ride Like the Wind” cover for the “Anchorman 2” soundtrack.

The newsman and the pop star teamed up for a duet of classic Christopher Cross’s single from 1980 — Burgundy’s era in the comedy sequel. On the track, Thicke (mercifully) does most of the singing, while Burgundy pretty much cracks-wise in between lyrics, plays some sweet jazz flute and adds backup vocals where appropriate. (And sometimes where not appropriate.)

The jokes are mostly literal knee-jerk reactions to Thicke’s belting out of Cross’ lyrics. At one point, Ferrell (as Burgundy) takes shots at the singer’s “Growing Pains” father, Alan Thicke, Mexico, and even Subaru cars. After all, Burgundy’s a Dodge man.

“That’s right folks, when Ron Burgundy rides, he rides like the wind,” Ferrell said during an interlude. “Not like a Subaru or golf cart — like the God-darned wind.”

Also read: Ron Burgundy Is Taking Over the World: 5 Reasons He Might Be Wearing Out His Welcome

As the goof wears on, which it does, the mustachioed TV journalist tries to find someone to grab a beer with, or at least give him a lift home. No takers from the studio team, it sounds like.

Listen to the “legendary” duet: