Wouldn’t it be great if “Inglourious Basterds” won Best Picture at the Academy Awards?

The conventional wisdom is that this year’s Oscar derby is a race between James Cameron’s “Avatar” and Kathryn Bigelow’s “The Hurt Locker.”

Still, every race has a dark horse, and there have always been a few board-markers and tin-mittens that put their money and their hopes on Quentin Tarantino’s deftly dastardly rewriting of history.

Sure, “Inglourious Basterds” could win the Oscar because it is a good movie, Tarantino’s a great director and it’s ultimately an homage to the power of film. Certainly lesser films of lower ambition have won in the past. 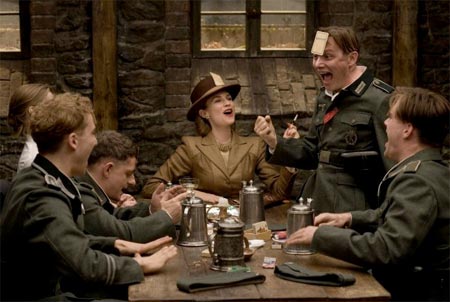 However, what would be really great if “Inglourious Basterds” won the Oscar for Best Picture at the 82nd Academy Awards would be the message it would convey: the triumph of the mash-up.

Mash-ups have become one of the most influential and interesting genres of 21st-century culture, and in “Inglourious Basterds,” Tarantino has created a mash-up masterpiece.

Evolving out of hip-hop sampling, DJ remixing and the technological proliferation of easy-to-use software, mash-ups are basically the blending of one or more distinct elements or cultural products with another.

They first got a large audience in 2001 when a tune called "Stroke of Genius," which meshed the vocal from Christina Aguilera’s "Genie in a Bottle" with the melody from The Strokes "Hard to Explain,” was heard from the far corners of the internet.

Since then, in the hands of musicians, MCs, filmmakers, writers and kids in their basement with ProTools, mash-ups have began to realign not only how contemporary culture is created, but the very idea of art and the execution of inspiration. And, as all truly innovative artistic movements do eventually, mash-ups have emerged in the mainstream.

“Inglourious Basterds” wasn’t the only Hollywood mash-up movie this year. Both Spike Jonze’s “Where the Wild Things Are” and Wes Anderson’s “Fantastic Mr. Fox” wove the genres to their own ends. However, as good as they both were, neither went anywhere as large as Tarantino.

Disparate elements of narrative, characters, linguistics, geography, cinema, Winston Churchill, Adolf Hitler and history as a concept and a fact were all melded together in “Basterds” to create something distinctively new, with an alternative fiery end to World War II that ultimately remixes the rest of the 20th century

As Hitler himself understood, movies are sometimes serious things, and sometimes what they create serious stories about ourselves. Within the next few years, as the last remaining WWII veterans and survivors die off and direct memories of that time fade, there will be a lot of people who will believe that Tarantino’s version of history is the true version of history. Not because they’re stupid, but because that’s the power of movies.

Another part of the mash-up power of “Inglourious Basterds” is the director’s rabid attention to detail. The use of David Bowie’s “Cat People (Putting Out the Fire),” which always seemed underused in 1982’s “Cat People,” was shamelessly brilliant and direct as the soundtrack to the burning of the Nazi elite in Tarantino’s movie.

Mistakenly cited as a remake in some quarters, even the film’s name is a mash-up. It, and not much else, was sampled from “Inglorious Bastards,” a macaroni combat flick from 1978. It might not mean a lot to some, but to those of us who love that genre, along with Blaxploitation, Mondo movies, Coffin Joe and Ozploitation, it was a well turned shout-out from the King of the Grindhouse Geeks.

Not that Tarantino’s the only mash-up in town right now.

On March 9, Gorillaz, the mash-up cartoon band created by Blur frontman Damon Albarn and “Tank Girl” creator Jamie Hewlett, release their third album “Plastic Beach.” Since their 2001 debut, the Grammy-winning “band,” comprised of characters 2D on vocals, the grizzled Murdoc Niccals on bass, Noodles on guitar and Russell on drums, seamlessly has mixed electronica, world beats, pop and hip-hop to create a new genre and a very new notion of what a band is in the 21st century.

Dennis Hopper lent his voice to the band’s second album, “Demon Days,” and, in a nice tip of the hat to Tarantino’s “Death Proof,” Bruce Willis and a very big gun pop up as a bounty hunter in the band’s “Stylo” video, which came out online this week.

This week also saw the publication of “Abraham Lincoln: Vampire Hunter.” Written by Seth Grahame-Smith, who last year put out the Jane Austen mash-up "Pride and Prejudice and Zombies,” the instant best-seller adeptly reveals America’s Greatest President to have also been one hell of a vampire slayer. In the novel, Grahme-Smith, who actually makes an appearance of a sort in the book himself, adds a whole new dimension to the cause and battles of the Civil War, putting Southern plantation owners in league with the undead.

No wonder, “Abraham Lincoln: Vampire Slayer,” which TheWrap had on its 2010 Hit List, has already been targeted for the big screen by Tim Burton. For a master of the post-modern macabre, and a mash-up maestro himself, “Vampire Slayer” is a natural progression after his just-opened “Alice in Wonderland.”

All of which is to say, think ahead.

Because if “Inglourious Basterds” doesn’t win the Oscar this year, “Abraham Lincoln: Vampire Slayer,” which one can only hope has a blade-wielding Liam Neeson as our 16th President, just might in 2011.