Anderson Cooper did not host his CNN show Monday night, revealing hours before that he had contracted COVID-19.

Cooper announced the diagnosis on his Instagram Story, alongside a photo of himself lying in bed.

“Just tested positive for COVID,” he wrote. “Thankfully the kids are negative. Hope to get back to work soon.”

In his stead, John Berman hosted “Anderson Cooper 360” and will do so again Tuesday, TheWrap confirms. The rest of the week’s hosts are still up in the air. 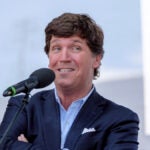 It’s not clear when Cooper will return to the show. So far, he has not said whether he is symptomatic.

After welcoming Sebastian in February, Cooper took a few weeks off from his show to spend time with his family. He had just recently returned.