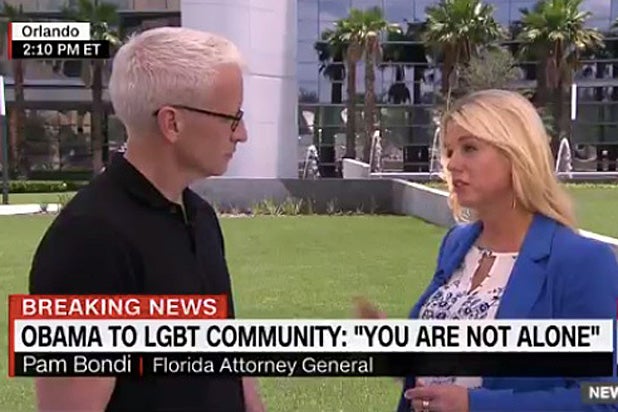 CNN anchor Anderson Cooper has gone head-to-head with Florida Attorney General Pam Bondi this week — and neither side is backing down.

Cooper interviewed Bondi Tuesday afternoon about the gay nightclub shooting massacre, but during the live broadcast in front of an Orlando hospital, he also grilled her about her history of opposing marriage equality and other LGBT issues.

“Anderson, I don’t believe gay people could do harm to the state of Florida,” Bondi said to Cooper during their back-and-forth. He then responded: “But you argued that in court.”

On Wednesday morning, Bondi took the acrimonious confrontation to the next level by firing back at Cooper on a morning radio show, something that he took issue with in a special CNN segment later that afternoon.

“As a rule, I think it is important that reporters don’t become a part of the story … we try to keep the focus on where it should be, on the victims and the families. But today the attorney general went on a radio show and made some claims about our interview with are just factually incorrect.

“She’s either mistaken or she’s not telling the truth,” he added.

Also Read: Orlando Killer's Wife Says She Tried to Talk Him Out of It, Could Face Charges

In her interview on WOR’s “Len Berman and Todd Schnitt in the Morning” radio show, Bondi lambasted Cooper for accusing her of “hypocrisy” in having fought against same-sex marriage for many years before now claiming herself to be a champion of the LGBT community.

“There’s a time and place for everything, but yesterday wasn’t the time nor the place in front of a hospital when we could have been helping victims,” Bondi said, claiming that instead of helping the victims with his position as “the champion for the LGBT community,” Cooper chose to “encourage anger and hate” by confronting her. “Yesterday was about unity … bringing people together,” she added.

“Before we went live, I said ‘Anderson, there are all the issues we need to talk about to help people people with.’ He said, ‘OK, thats great.'”

They talked for a few minutes about potential scams — like shady funeral homes and fake GoFundMe pages — targeting people since the tragedy. But he said Wednesday that it was not true that she was booked to talk about them in the first place. “Nowhere in these notes were scams mentioned,” he said, while displaying the pre-interview notes.

“So instead of talking about what her office suggested, I chose to ask her about comments she herself has publicly made on numerous other television appearances over just the last few days — comments that seem contradictory to her record in dealing with gays and lesbians in her state,” he said.

Bondi said that “he cut out the entire first portion” of the interview — even though it aired live Tuesday afternoon — and Cooper pointed out that she was referring to an edited clip that posted later online.

“But lets be real here — Ms. Bondi’s big complaint seems to be that I asked in the first place in the wake of a massacre that targeted gay and lesbian citizens, that I asked about her new statements about the gay community, and about her old ones,” he explained.

Bondi said Cooper’s line of questioning didn’t help the families gain trust in her office when she was trying to help. “Of course, I have been getting horrible hatred emails and texts now based on Anderson’s story. So that was just sad because he had the opportunity to bring our country together yesterday and talk about what’s right and what’s good instead of a story filled with anger.”

Cooper said his story is not filled with anger and stressed that he was respectful and thinks Pam Bondi is “a nice person.”

Still, he said she signed off on a 2014 federal court brief that claimed that married gay people “would impose significant public harm” and spent taxpayer money to stop same-sex couples from marrying.

“The very rights that now allow gay spouses to bury their dead loved ones, that’s a right that would not exist if Ms. Bondi had her way — I think it is OK to ask her about that,” he concluded.

See Cooper’s explanation of the events with excerpts of Bondi’s radio interview below.