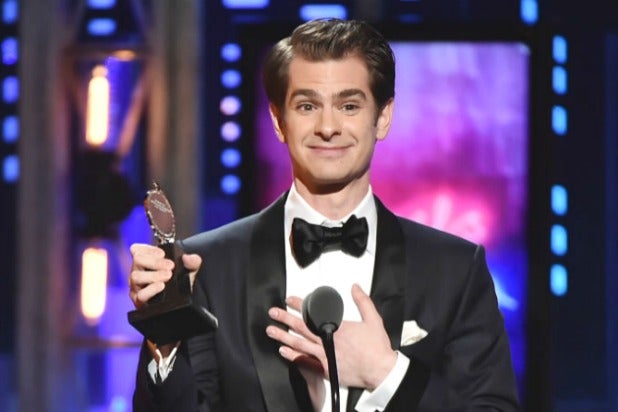 “Silence” star Andrew Garfield had plenty to say to a fan after his mother interrupted the star’s lunch on Monday hours after he won a Tony Award — but in the most polite, British way possible.

“Hi Ian, you have a very sweet mother who doesn’t mind crossing boundaries over lunch tables,” Garfield said in an adorable video message shot on a smartphone. “I hear you’re sick and you didn’t get to go out last night. Get better, sending love.”

And just in case there was any confusion over who’s mug was in the camera, the proper English gentleman politely added: “This is Andrew Garfield, by the way.”

My mom had lunch in the same restaurant as Andrew Garfield today and this is what followed pic.twitter.com/C55MB7fDg8

The video was posted on Twitter by Ian Palmer, with the caption: “My mom had lunch in the same restaurant as Andrew Garfield today and this is what followed.”

His sister, Emily, went on to comment, “Andrew Garfield politely throwing shade at my mother 12 hours after winning a Tony is my favorite part of today so far.”

The cute interaction came after the “Hackshaw Ridge” actor won the award for Leading Actor in a Play at the 72nd annual Tony Awards Sunday for his performance as AIDS patient Prior Walter in a hit revival of Tony Kushner’s epic play “Angels in America.”

During his acceptance speech, Garfield showed his support for the LGBTQ community by calling out the Supreme Court’s recent ruling in favor of a Colorado baker who refused to bake a cake for a same-sex couple for religious reasons.

“We are all sacred and we all belong,” he said. “So let’s just bake a cake for everyone who wants a cake to be baked.”

Garfield dedicated his award to the “countless LGBTQ people who have fought and died for the right to live and love as we are created to.”

The cake reference was aimed at the Supreme Court’s ruling last Monday in favor of Masterpiece Cakeshop owner Jake Phillips, who made a claim of religious freedom  to justify his decision to refuse to bake a wedding cake for a same-sex couple.