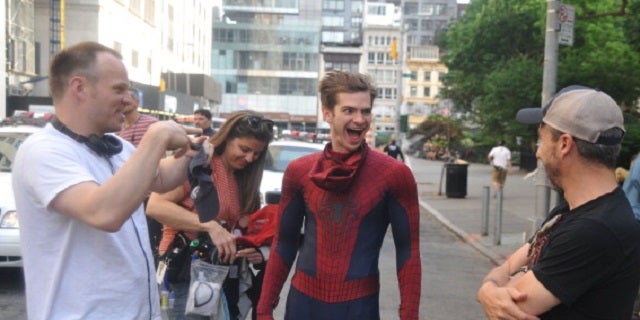 Andrew Garfield wants to see Spider-Man with another man.

"The Amazing Spider-Man" star Garfield told EW that he would imagine his tights-clad character in a relationship with a guy, and even has a thought as to who could play his love interest.

According to Garfield, he broached the possibility during a talk with "Amazing Spider-Man" producer Matt Tolmach.

"I was kind of joking, but kind of not joking about MJ," Garfield said, referring to the nickname of Peter Parker's girlfriend, Mary Jane Watson. "And I was like, 'What if MJ is a dude?' Why can’t we discover that Peter [Parker] is exploring his sexuality?  It’s hardly even groundbreaking! … So why can’t he be gay? Why can’t he be into boys?"

As for who Garfield could see Spidey hooking up with, the actor thinks "Friday Night Lights" alum Michael B. Jordan would be an ideal choice.

"I've been obsessed with Michael B. Jordan since 'The Wire,'" Garfield said. "He’s so charismatic and talented. It’d be even better –we’d have interracial bisexuality!"

There have been gay comic-book characters before, including iterations of The Rawhide Kid, Batwoman and the Green Lantern.