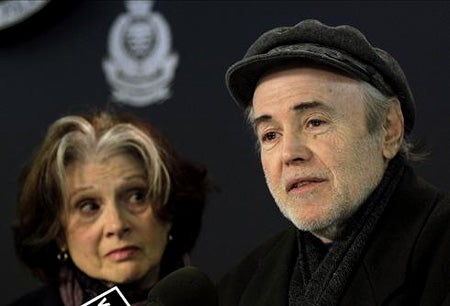 Walter and Judy Koenig, parents of missing “Growing Pains” star Andrew Koenig, abruptly left a Vancouver studio before they were to appear on Larry King Live on Wednesday – and left King confused.

The Koenig segment had apparently been pushed back to the end of the CNN show to accommodate King’s exclusive interview with the president and CEO of Toyota, as well as an update on the killer whale attack at Sea World.

"Folks, for some reason unbeknownst to anyone, Walter Koenig, the father of the missing Andrew Koenig, and Judy Levin-Koenig … left the studio in Vancouver,” King told viewers. “We checked them out. They were prepared to go on. I said hello. They said hello. We said we’ll be on in two minutes. They said fine and they got up and left for reasons unknown.”

“Still not sure what happened with the Koenigs. I talked to them in the break and told them they were on next. Then they left.”

Andrew Koenig, who played Richard “Boner” Stabbone on the hit show, went missing on Valentine’s Day. Earlier this week, police in Vancouver said they have evidence that indicates Koenig is alive and “lying low.”

Update: Koenig’s parents said they felt "disrespected" after being bumped.

Update #2: Body believed to be Andrew Koenig found in Vancouver. If it is, it’s a sad, sad end to the case.