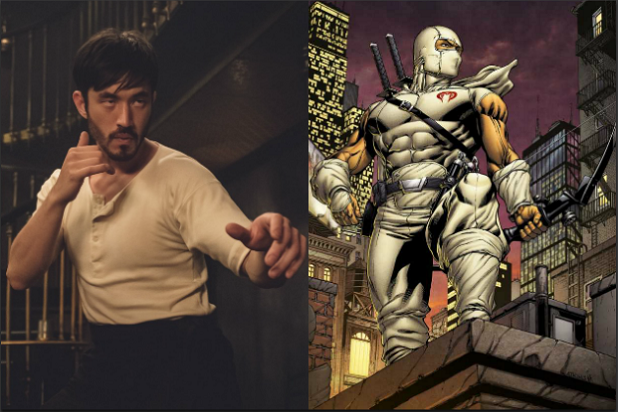 “Snake Eyes,” the third live-action film based on the “G.I. Joe” toy line, will focus on the origins of the fan-favorite character known for his masked face, black commando uniform and ninja training. Robert Schwentke, the director of “Red” and “R.I.P.D.,” is set to direct “Snake Eyes” for Paramount and Allspark Pictures, in association with Skydance. The film will be released on Oct. 16, 2020.

Storm Shadow, like Snake Eyes, was created by Marvel Comics writer-editor Larry Hama. He debuted in 1984 on the pages of Marvel’s “G.I. Joe: A Real American Hero” comic series, before appearing that same year in the second “G.I. Joe” animated miniseries produced by Sunbow Entertainment. As depicted in the comics, Storm Shadow is a Japanese-American special forces soldier and member of the fictional Arashikage ninja clan, who was once friends with Snake Eyes before becoming his bitter enemy. The two eventually end up on opposite sides of the conflict between G.I. Joe and the terrorist organization COBRA.

“Beauty and The Beast” screenwriter Evan Spiliotopoulos wrote the screenplay. The story centers on Snake Eyes’ origins where he tries to become a member of the Arashikage Clan, a ninja clan based in Japan. According to “G.I. Joe vs. Cobra: The Essential Guide,” the Arashikage worked as shadowy assassins for generations, using deception to earn their keep as ninjas, as well as developing a reputation for being able to perform impossible tasks. Known as the Young Master, Storm Shadow studied under his uncles, clan leaders Hard Master and Soft Master. Storm Shadow was poised to continue the family business and inherit stewardship of the clan, but Snake Eyes proved to be an amazingly quick study.

“G.I. Joe: The Rise of Cobra” grossed more than $300 million worldwide back in 2009 on a reported production budget of $175 million, not including prints and advertising. The 2013 sequel “G.I. Joe: Retaliation” starring Dwayne “The Rock” Johnson as Road Block grossed $375.7 million on a budget of $155 million. Channing Tatum, who played Duke in the first two films, was killed off early in “Retaliation” after complaining to Howard Stern how much he hated the role. Storm Shadow was previously played Byung-Hun Lee in “The Rise of Cobra” and “Retaliation.”

Andrew Koji is a British actor of mixed Japanese and English heritage and is known for his TV roles in “The Wrong Mans,” “Call the Midwife,” “The Innocents.” Koji plays the lead role of Ah Sahm in HBO/Cinemax action crime series “Warrior.”