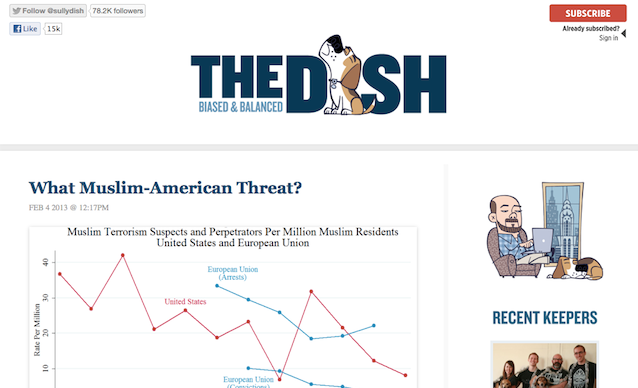 The political journalist kicked off the new year by announcing that his plans to migrate The Dish over to AndrewSullivan.com and erect a $19.99-a-year paywall.

Sullivan's entry into entrepreneurship brings with it another possible model for monetizing content.

"Incoming links from other blogs and websites will never, ever count toward the meter; other bloggers need not fear that their readers won’t be able to see content they link to," Sullivan said in his introductory post.

The new site, designed to look similar to the former Daily Beast-hosted blog of the same name, is ad-free and allows users to scroll continuously downward and read new posts.

This, Sullivan said on Jan. 2 when he declared his independence that he wanted to avoid outside influence.

"We felt more and more that getting readers to pay a small amount for content was the only truly solid future for online journalism," Sullivan wrote. "The only completely clear and transparent way to do this, we concluded, was to become totally independent of other media entities and rely entirely on you for our salaries, health insurance and legal, technological and accounting expenses."

Sullivan also previously hinted at plans for a tablet-only magazine, a bold move just two months after the folding of News Corporation's tablet, The Daily.