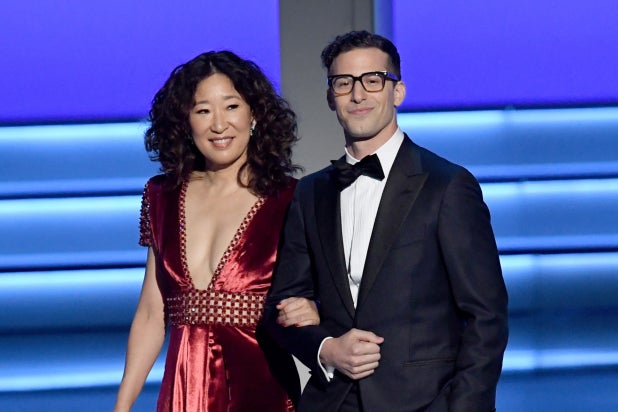 The Hollywood Foreign Press Association has finally found its Golden Globes hosts a month before the show, announcing Thursday that Andy Samberg and Sandra Oh will emcee the 76th edition of the awards.

“Sandra and Andy are the perfect choices to host this world-class event,” said Paul Telegdy and George Cheeks, co-chairmen of NBC Entertainment. “They bring wit, charm and style to a room filled with the very best of film and television. It’s sure to be another unforgettable fun-filled night.”

Samberg and Oh had a memorable back-and-forth during the Primetime Emmys back in September, recreating the infamous 2017 Oscars flub in which Warren Beatty incorrectly announced that “La La Land” won for Best Picture, when the winner was, in fact, “Moonlight.”

Samberg is no stranger to NBC’s airwaves, having been a mainstay on “Saturday Night Live” from 2005 to 2012. His cop comedy “Brooklyn Nine-Nine” makes its NBC premiere — after five seasons on Fox — on Jan. 10, just four days after the Globes. Oh, meanwhile, currently stars (and serves as co-executive producer) on BBC America’s “Killing Eve,” for which she was nominated for Best Actress in a Drama at this year’s Emmys.

“We’re excited to welcome Sandra Oh and Andy Samberg as co-hosts of Hollywood’s Party of the Year,” said HFPA President Meher Tatna. “Both Golden Globe Award recipients have continually showcased their talents in film and television, and we can’t wait see what their undeniable chemistry will bring to the Golden Globes stage.”

Earlier this year, NBC closed a deal with the Hollywood Foreign Press Association and Dick Clark Productions to keep the annual Golden Globe Awards at the network for at least another eight years. NBC has hosted the Globes broadcast for the last 23 years. The new deal will extend the association through 2026, beginning with next year’s 76th annual awards.

The HFPA changed the title of the honorary position last year from Miss Golden Globe to Golden Globe Ambassador, seeking to make the position more gender-neutral. The position is given to the child of a well-known actor. Simone Garcia Johnson, daughter of Dwayne Johnson, served as ambassador at last year’s Golden Globes.