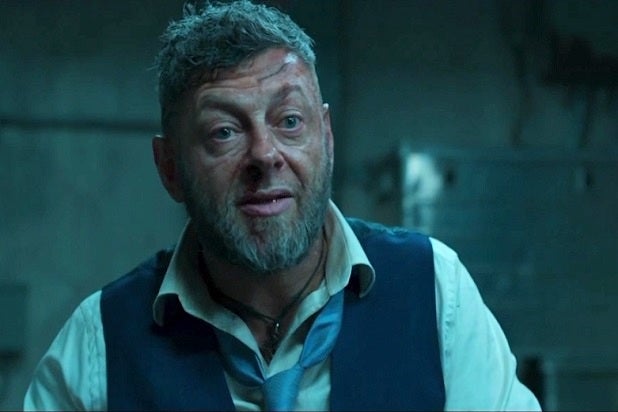 Andy Serkis counts himself among those who’ve taken a pounding from a superhero, and it was not something he’ll soon forget.

During filming for the pivotal chase and fight scene set in South Korea in “Black Panther,” Serkis said that star Chadwick Boseman rattled him when T’Challa kneed him in the chest.

“Very, very first take, he kneed me so hard in the chest- ’cause he couldn’t really see with his mask on — I thought like he broke my ribs on the very first take,” Serkis said in an interview with PeopleTV’s “Couch Surfing.”

Serkis recalled that it was a night shoot and he was jet-lagged after having just flown into Atlanta to be on set. They ended up filming that shot 30 more times, the Gollum actor and “Mowgli” director said, with the car he was riding in flipping and crashing over and over, leaving him exhausted and beaten.

He also praised another stunt in the film in which his character, Ulysses Klaue, fires a laser cannon at T’Challa, sending him spiraling backwards through the floor and onto a gaming table on a lower level.

“That was not a CG double. I’ll never forget that moment,” Serkis said. “The guy had a wire, wrapped around him several times, so he was like a spinning top. So when I fired at him, he literally backflipped right across the room and dropping 25 feet. I’ve never seen a stunt like it, or been that close to it.”

Watch the clip of Serkis discussing “Black Panther” below (via EW), and check out the full episode of “Couch Surfing” here.