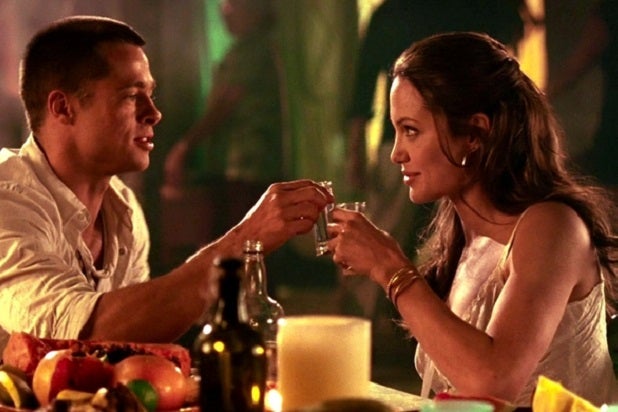 Brad Pitt and Angelina Jolie-Pitt‘s new romantic drama “By the Sea” made its limited debut at the box office this weekend, but it came up far short of their last big screen teaming, 2005’s “Mr. & Mrs. Smith.”

“By the Sea” brought in $95,000 from 10 theaters for a mediocre $9,544 per-screen average, about half of what a distributor would like to see from a film in so few locations.

The limited opening is a far cry from the $50.3 million that the pair’s “Mr. & Mrs. Smith” opened to a decade ago for Fox. That action comedy was in 3,441 more theaters than Universal had “By the Sea” in, so it’s not a fair comparison.

A lot of things have changed in the decade since the two stars fell in love while shooting “Mr. & Mrs. Smith.” For starters, they’re a brand (Branjelina), married (with six kids) and Jolie has become a global icon with her humanitarian work with refugees for the United Nations and her fight with cancer. They are both Hollywood heavyweights and each has been dynamic on their own at the box office.

Just last year, Oscar winner Jolie rang up her best box-office opening with the $69 million debut of Disney fairy tale “Maleficent,” and she directed the Louis Zamperini biopic “Unbroken.” She’s been among the most bankable female stars in Hollywood since the 2001 blockbuster “Lara Croft: Tomb Raider,” which she followed up with the hits “Wanted” and “Salt.”

Two years ago, Pitt’s zombie thriller “World War Z” debuted to $66 million. He received his second and third Academy Award acting nominations for “The Curious Case of Benjamin Button” (2008) and “Moneyball” (2011). He also produced “The Departed” (2006) and “12 Years a Slave” (2013), both of which won the Academy Award for Best Picture.

Those are the kinds of achievements that endear a star to studios, and enable them to make a small, personal film that doesn’t have great commercial potential.

“Passion projects have always been a part of the Hollywood machinery and are a way for studios to show notable stars their unconditional love,” Rentrak senior media analyst Paul Dergarabedian told TheWrap.”They are most often films that are ‘off the beaten path’ for the stars who use these productions to tell a story that they are passionate about, but not necessarily aimed at a mass audience.”

The payoff is more likely to come in a future project rather than grosses from “By the Sea” for Universal, which limited the production budget to $10 million.

“In general, it’s a great way for artists to swing for the fences with studio support, but without studio intervention, and that can create valuable relationships that enable the stars and the studio to work again on perhaps their next blockbuster,” he said.

The limited rollout for the film starring the two A-list stars — typical for art or specialty films which bank on word of mouth to build audiences — indicated the studio’s muted expectations for “By the Sea.”

Gradual or “platform releases” as they are known, typically start out in a handful of theaters, then rely on strong reviews to build interest and help them find an audience as they gradually expand over weeks.

But “By the Sea” doesn’t have good reviews. That means finding an audience will be difficult, since it’s at just 32 percent positive on Rotten Tomatoes and the market is filled with adult fare.

“By the Sea” is Jolie’s third directing gig. Its grosses are looking a lot like those of her first film, the 2011 war drama “In the Land of Blood and Honey,” which managed just $303,000 at the box office. Last year’s “Unbroken” debuted to $30 million and went on to take in $115 domestically and $160 million worldwide.