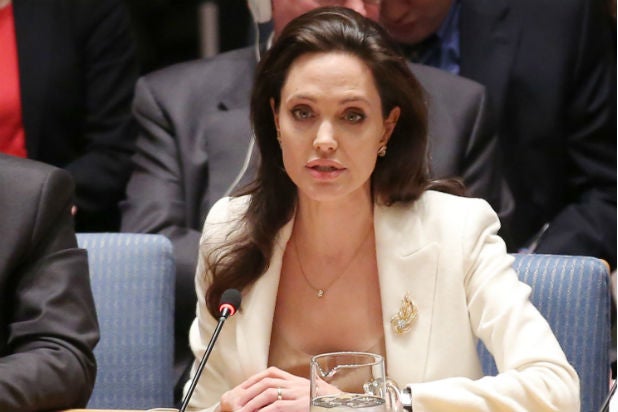 Angelina Jolie took her voice from Hollywood to the United Nations in New York on Friday to ask them to help millions of Syrian refugees.

The “Unbroken” director also harshly criticized the UN Security Council for being paralyzed by its division over the country’s four-year conflict.

“We cannot look at Syria, and the evil that has arisen from the ashes of indecision, and think this is not the lowest point in the world’s inability to protect and defend the innocent,” Jolie said, according to The Guardian.

Jolie’s powerful presence — which was described as “beautiful” by Syria’s ambassador — occurred as the council prepared to hear details of a new plan for peace talks set to begin early next month in Geneva.

To date, nearly four million Syrians have fled their homeland to neighboring countries such as Egypt, Iraq, Jordan, Lebanon, Turkey and parts of Europe.

Rather than just read about it, Jolie — who has made 11 visits to see Syrian refugees in the region since the conflict began in 2011 — urged council members to visit refugees and see the crisis for themselves. She also said she would like to see the foreign minister of each of the 15 council members come to the table to negotiate a political solution.

Not all of those who have left Syria have found safety, 1,300 migrants have drowned at sea, mostly in the Mediterranean, over the past three weeks.

“It is sickening to see thousands of refugees drowning on the doorstep of the world’s wealthiest continent,” she said. “No one risks the lives of their children in this way except out of utter desperation.”

Jolie first began working with the United Nations in 2001 when she visited refugee camps in Cambodia after witnessing the effects of the humanitarian crisis while filming “Lara Croft: Tomb Raider.”

She has since been on 50 field missions spanning more than 30 countries, including Sierra Leone, Pakistan, Afghanistan and Syria.