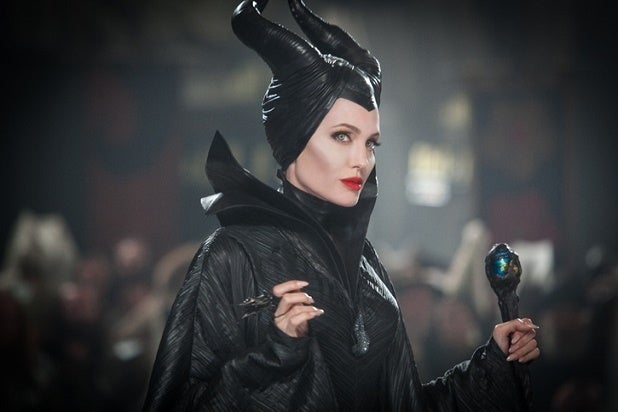 That’s better than the $3.9 million that “Alice in Wonderland” took in from early shows on its way to a $116 million debut in March of 2010, and the $2 million that “Oz: The Great and Powerful” took in as part of its $79 million opening last March. “Maleficent” had an edge, however, as its shows started at 7 p.m., while “Alice” screenings began at midnight and “Oz” started at 9 p.m.

By Friday night, Disney’s live-action 3D update of its 1954 animated classic “Sleeping Beauty” will be in nearly 4,000 theaters in North America, with the majority 3D and 346 on IMAX.

Jolie’s turn as the Mistress of All Evil is her first live-action starring role in four years, and “Maleficent” is expected to bring in more than $60 million this weekend. If the projections are right, “Maleficent” will be Jolie’s biggest box-office opening ever, ahead of the $50.9 million put up by “Wanted” in 2008.

That would knock Fox and Marvel’s mutant mashup “X-Men: Days of Future Past” out of the top spot after one week and easily best the weekend’s other wide opener, “A Million Ways to Die in the West.” Seth MacFarlane‘s R-rated cowboy comedy is projected to take in $25 million for Universal and Media Rights Capital. “Million Ways” brought in $891,000 from early shows Thursday.

Also read: ‘Maleficent’ Reviews: Angelina Jolie Delivers – But Does the Rest of the Movie?

The gender breakdown — 54 percent female — was encouraging for Disney. A big factor in how high “Maleficent” can go this weekend will be the extent to which it plays to men, in addition to its target moms-and-daughters demographic, and that suggests a reasonable male turnout.

Robert Stromberg is making his directing debut on “Maleficent,” after serving as the production designer on “Avatar,” “Alice in Wonderland” and “Oz the Great and Powerful.” Elle Fanning, Sharlto Copley and Juno Temple co-star.

Jolie is the producer on the $180 million “Maleficent,” along with Joe Roth, who was behind “Alice in Wonderland,” “Oz: The Great and Powerful” and “Snow White and the Huntsman.”