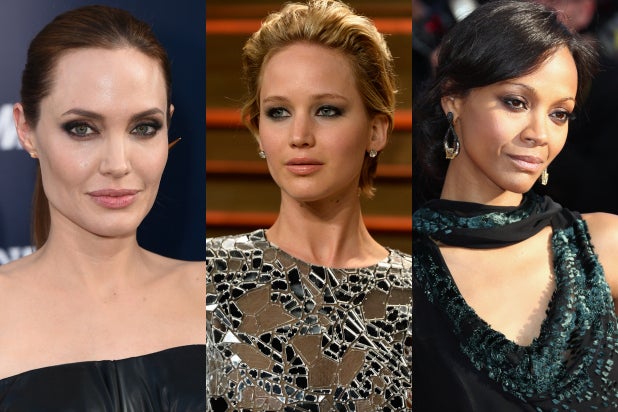 Jennifer Lawrence appears to be the most-liked summer film actress — were you expecting someone else?

A study of adults 18-49 conducted for TheWrap found that the “X-Men: Days of Future Past” star has a 27 Positive Q Score, well-above average for a celebrity. Q Scores are a research tool used by TV networks as well as studios in determining how favorably or unfavorably celebrities are viewed by consumers.

Lawrence topped her closest fellow actress, Melissa McCarthy (“Tammy”), by two points. “Maleficent” actress Angelina Jolie and Rachel McAdams of “A Most Wanted Man” tied for third among actresses, each with a 23.

Here’s how Q Scores work. The Q Scores company provides a celebrity’s name and a brief description to more than 1,800 study participants. The viewers are asked if they recognize the person, and how they feel about him or her.

The average among actresses in our study was a Positive Q Score of 18.

Amy Poehler (“They Came Together”) and Shailene Woodley (“The Fault in Our Stars”) both earned a 22.

However, Woodley’s comes with an asterisk. The young actress had a low recognition level last year, the last time she was measured. Her 15 score in awareness renders her Q Score unstable.

On the wrong end of the rankings is Rosario Dawson (“Sin City: A Dame to Kill For”), who pulled in just a 10 Positive Q Score, good for last place in the summer study. But her last available measurement was in 2010.

Elizabeth Olsen (“Godzilla”), with a 12, is up one spot. Rose Byrne (“Neighbors”) and Keira Knightley were a point higher, with Emily Blunt getting a 14 in a 2010 study — the most recent number for her. Elisabeth Banks and Kate Hudson tied with Blunt.

Scarlett Johannson scored a 17, one more point than Megan Fox, and two above Zoe Saldana.

Here are the full rankings: