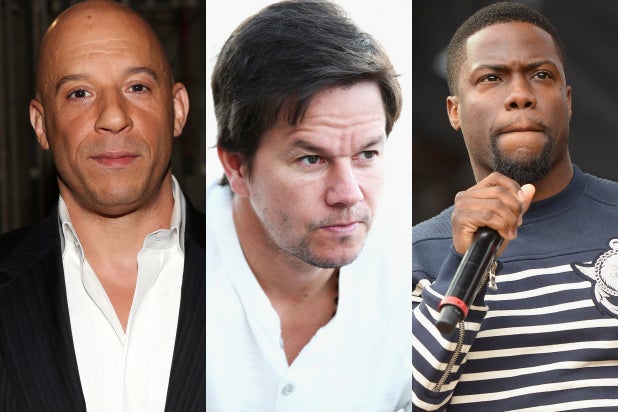 Film studios and theaters are banking on your bucks to blow open another blockbuster summer, though experts predict this season will be less hot than last year’s. Still, moviegoers have big decisions to make with their disposable income from now until Labor Day. So what better to spend it on than movies with some of the most-beloved actors on the planet?

But if likability equaled box office success, everyone would be seeing Morgan Freeman in “Lucy” (though that is expected to be a mid-range earner) — the beloved actor has the highest Positive Q Score among his male peers, with a whopping 47.

Freeman also happens to be the most recognizable star on the below list, with 91 percent of those polled having familiarity.

The runner-up slot went to the increasingly popular Kevin Hart, star of “Think Like a Man Too.” His 34 Positive Q Score is very impressive, despite being a full 13 points behind Freeman. Adam Sandler, who just suffered a opening weekend misfire at the box office with “Blended,” ranks third among men with a 28, while Vin Diesel (“Guardians of the Galaxy”) is fourth with a 27.

In the newest edition of TheWrap’s Q Scores series, executive vice president Henry Schafer of the Q Scores company, focused the data on adults 18-49, as they tend to be the more frequent moviegoers.

Q Score is a widely utilized research tool used by TV networks as well as studios in determining how favorably or unfavorably celebrities are viewed by consumers and here’s how it works: Schafer’s Q Score team provides a celebrity’s name and a brief description to more than 1,800 viewers. The viewers are asked if they recognize the person, and how they feel about him or her. Most measurements were done this year, though some of the below — like Freeman’s (2010) — are older.

Also turning in strong numbers are Seth MacFarlane (“A Million Ways to Die in the West”) with a 25, Hugh Jackman (“X-Men: Days of Future Past”) with a 24 and Mark Wahlberg (“Transformers: Age of Extinction”) with a 23.

The males in the study averaged a 20 Q Score.

Eric Bana (“Deliver Us From Evil”), not so much. Bana is at the bottom with just a 9 Positive Q Score, though his last available measurement was 2009. Chris Pratt (2013, “Guardians”) and Josh Brolin (2010, “Sin City: A Dame to Kill For”) each have 11’s. Though it’s important to note that their recognizability numbers are considerably lower than actors who scored higher positive Q Scores.

In the cases of Pratt and Boseman, Schafer warns that the Q Score is unstable due to low familiarity.