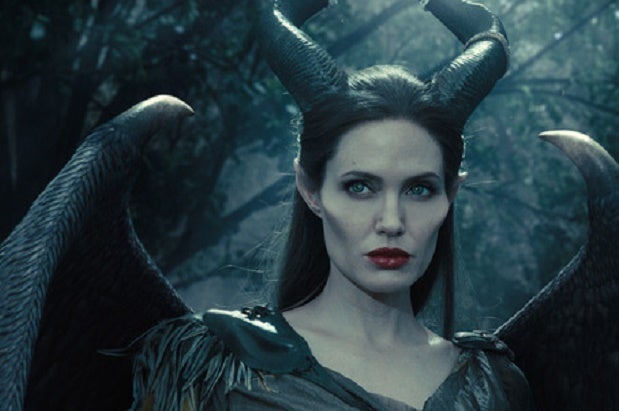 “Maleficent,” with Angelina Jolie as the Mistress of All Evil in her first starring role in four years, conjured $70 million and dominated the North American box office this weekend.

That displaced the reigning No. 1 film “X-Men: Days of Future Past” — the fifth straight champ to be one-and-done — which finished second with $32.6 million, and blew away the weekend’s other wide opener, “A Million Ways to Die in the West.” Seth MacFarlane’s raunchy cowboy comedy was third with a disappointing $17 million for Universal.

The opening for the live-action update of Walt Disney Picture’s 1959 animated classic “Sleeping Beauty” was Jolie’s best ever — and $20 million over the $50.9 million that “Wanted” debuted to in 2008.

Disney has made a big bet on the actress and the effects-laden $180 million fairy tale epic. Jolie’s star power overseas is considerable, and “Maleficent” is off to a strong start abroad as well, taking in more than $100 million from 47 foreign markets.

With the PG-rated “Maleficent,” Disney marketers targeted the same moms-and-daughters crowd that made “Frozen” a blockbuster. They connected, drawing an audience that was 60 percent women and 30 percent under the age of 18. Families accounted for 45 percent of the crowd, which liked it more than the critics and gave the film an “A” CinemaScore.”

Premium pricing for 3D provided a relatively small boost for “Maleficent,” at 35 percent of the grosses. But the 347 IMAX theaters brought in $6.7 million and accounted for 16 of the top 20 grossing locales.

Robert Stromberg made his directing debut on “Maleficent,” after serving as the production designer on “Avatar,” “Alice in Wonderland” and “Oz the Great and Powerful.” Elle Fanning, Sharlto Copley and Juno Temple co-star, and Linda Woolverton wrote the script.

Also read: Will the ‘Maleficent’ and ‘Lion King’ Writer Finally Get to Direct Her Own Epic?

The opening for “Maleficent” was under the $79 million that “Oz” debuted with last year, and well under the $116 million that “Alice” opened to in 2010, but both of those rolled out in the less-crowded March corridor.

The R-rated “A Million Ways to Die” didn’t connect much with the young crowd. Its audience was 72 percent older than 25 and predominantly male (55 percent). They weren’t impressed and gave it a so-so “B” CinemaScore, in line with the critics’ tepid take (33 percent positive on Rotten Tomatoes).

Universal co-produced “Million Ways” for $40 million with Media Rights Capital, its partner on “Ted.” The expectations for the raunchy Western were much lower — the studio had hoped to hit $20 million — but this has to be disappointing for MacFarlane, the former Oscar host and creator of TV’s “Family Guy.” “Ted,” his foul-mouthed teddy bear tale debuted with $54 million on this weekend in 2012 and went on to take in $549 million worldwide.

Also read: Why Hollywood Will Never Give Up on the Western

The roughly 65 percent second-week drop for “X-Men: Days of Future Past” is in line with that of other recent superhero epics, but somewhat surprising in that Fox’s Marvel mutant mashup was very well reviewed and received an “A” CinemaScore.

But with its domestic total at $162 million and foreign at $338 million after adding $95.5 million from abroad this weekend, “Days of Future Past” is now the highest-grossing “X-Men” movie ever, with $500 million worldwide in just two weeks.

Things didn’t improve much for Warner Bros.’ “Blended,” the Adam Sandler-Drew Barrymore romantic comedy, which took in $8.4 million, a decent 45 percent drop from its opening week. It finished fifth, behind “Godzilla.” The monster remake from Legendary Pictures and Warner Bros. Took in $12.2 million to raise its domestic total to $175 million and is over $340 million worldwide after its third week.

Also see: ‘X-Men’ in 3 Minutes: Everything You Need to Know Before Seeing ‘Days of Future Past’ (Video)

Sony’s “The Amazing Spider-Man 2” and Disney’s Jon Hamm baseball movie “Million Dollar Arm” were battling for seventh, with both at around $7 million for the weekend. Sony’s Marvel superhero sequel is over $190 million domestically and has taken in more than $690 million worldwide in five weeks. It passed the international total of “The Amazing Spider-Man” this weekend with $497 million.