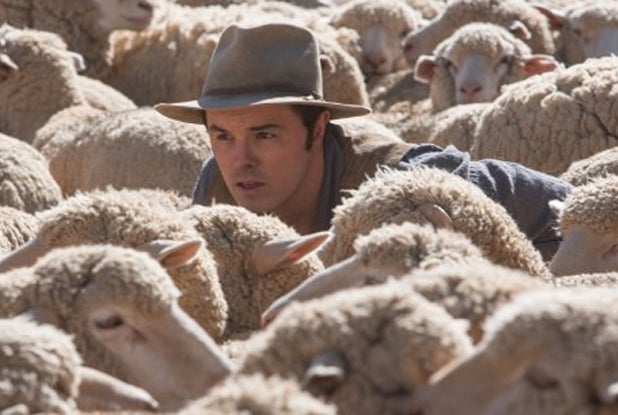 The Western should have died years ago. A vestige of an era before we had 50 states, it is a genre of stories about impolitic men in the age of the politically correct, about riding horses in a car culture and about traversing unsettled land that has long since urbanized.

A quintessentially American genre, the Western’s commercial appeal should be limited now that other countries dominate the movie business.

So why did Media Rights Capital, Scott Stuber and Seth MacFarlane — the same savvy trio that made “Ted” — make a Western?

Because the genre is riding high commercially and artistically. And because MacFarlane wanted to make one.

Also read: ‘A Million Ways to Die in the West’ Review: Vulgarity Heads Off Absurdism at the Pass

Universal and Media Rights Capital the “Family Guy” creator the keys to the kingdom after his success in directing “Ted,” the second highest-grossing R-rated comedy in movie history.

MacFarlane’s hankering for a Western comedy reflects the genre’s lasting cultural resonance. Several of the most prominent and respected filmmakers in contemporary American cinema have made a Western in the past decade, including Joel and Ethan Coen, Ang Lee and Quentin Tarantino.

See photos: The Only 8 Western Comedies That Hollywood Has Made Since 1990

Critics have lauded every effort, while both Hollywood and moviegoers have rewarded the filmmakers with their highest respective honors — Oscars and dollars.

The Coen brothers made two Westerns in four years, winning their sole Best Picture statuette for “No Country for Old Men”; it and “True Grit” racked up 18 Oscar nominations together. Lee won his first Oscar for “Brokeback Mountain” while Tarantino won his first Oscar in 19 years for “Django Unchained.”

All four of those movies grossed more than $200 million at the global box office, adjusted for inflation.

The success of those movies, “Django” and “True Grit” in particular, was encouraging to Modi Wiczyk, whose MRC financed and produced “A Million Ways to Die in the West.”

If Harvey Weinstein wagered on Quentin Tarantino and Megan and David Ellison bet on the Coen brothers, why shouldn’t he place his faith in MacFarlane?

“The way you test whether a genre or milieu has become problematic is if a good version of that movie didn’t perform,” Wiczyk told TheWrap. “If the bias is so strong that quality doesn’t speak to it.”

The Western has been written off many times before. Just last year Esquire ran a post with the headline “Quentin Tarantino Wants to Save the Western.” Two years before that Vulture asked “Do People Still Care About Westerns?”

Esquire and Vulture must have missed “True Grit,” to say nothing of TV shows like “Hatfields & McCoys,” “Deadwood” and “Justified.”

The Western has been a dominant genre in American cinema since its inception. Edwin Porter’s “The Great Train Robbery” was one of the first movies to employ cross-cutting, a now ubiquitous technique (it’s when the filmmaker cuts between two scenes in different locations). D.W. Griffith, one of the most successful directors in early Hollywood, made a series of Westerns before his controversial epic “The Birth of a Nation.”

Griffith “helped to establish the Western film as a specific form of visual and narrative art,” write Mary Lea Bandy and Kevin Stoehr in “Ride, Boldly Ride,” a comprehensive study of the movie Western.

The film industry soon relocated to California, and it was not long before John Ford, a titan of early American cinema, would make several silent Westerns every year. He later introduced viewers to the now iconic landscape of Monument Valley, Utah, in “Stagecoach.”

The Western flourished in the postwar period, as filmmakers offered Americans two distinct visions: the patriot vanquishing his enemies and the more complex tale of an antihero fighting injustice and his own demons at the same time.

Howard Hawks made “Red River,” Fred Zinnemann made “High Noon” and Ford unleashed a string of movies that remain required viewing for any aspiring filmmaker.

“Americans loved Westerns in the 1950s and ’60s,” Ray Merlock, a professor at the University of South Carolina Upstate, told TheWrap. “In the 1940s, almost 40 percent of movies Americans watched in theaters were Westerns.”

The 1960s and early 1970s were fertile ground for new kinds of Western, from Sam Peckinpah’s bloody “The Wild Bunch” to Mel Brooks’ uproarious “Blazing Saddles.” That movie delivered the most famous fart scene in movie history, which clearly inspired the scatological musings in “Million Ways.”

That’s to say nothing of the spaghetti Westerns, of which Sergio Leone’s operatic “Once Upon a Time in the West” is easily the most popular.

Yet this creative breakthrough would not last long. The Western, like the rest of America, was shaken by Vietnam, Watergate, the civil rights movement and feminism.

“Broadly, the Western was seen as imperialistic,” Merlock said. “People saw the Western as a justification for Americans crossing the country and exterminating the Indians, taking whatever land they wanted. Women typically did not fare well in Westerns, where they were the schoolmarm and the prostitute.  There are not very many examples of African-Americans in Westerns either.

“A lot of books came out condemning the Western, putting it in a macho-violent context.”

A couple of fiascos, none more notable than Michael Cimino’s “Heaven’s Gate,” hindered the genre as well. Sexism and racism are one thing, but commercial failure is something Hollywood cannot abide.

Also read: ‘Django Unchained’ Debate Rages Among African-Americans: Is It Entertainment or Abomination?

Though the greed of Wall Street, Michael Jackson and the Cold War dominated culture in the 1980s, the Western resurfaced in another form: the science fiction movie. As Westerners ran out of new territory to conquer, they looked to space as the next frontier. George Lucas initially conceived “Star Wars” as a Western set in outer space.

“Some people say ‘Avatar’ could have been Western,” Jason Clark, a producer of “Million Ways,” told TheWrap. “If you strip away and take the story, it is a bunch of people taking advantage of natives and the mismanagement of resources.

“The mythology based around the West is too powerful to completely disappear.”

Westerns set in the actual West resurfaced in the early 1990s with a pair of Oscar winners: Kevin Costner’s “Dances With Wolves” and Clint Eastwood’s “Unforgiven.” They soon gave way to a series of popular Western comedies, “City Slickers,” “Maverick” and “Shanghai Noon” chief among them.

The most successful Westerns of the past decade were an animated action comedy about a chameleon named “Rango,” a gay love story and a slave’s revenge fantasy — subject matter that would make John Wayne fall out of his saddle. More conventional TV Westerns like “Justified” and “Deadwood” have received sterling reviews and strong ratings.

“I don’t think the Western has ever gone away,” Merlock said. “It resurfaces in ways that are exciting to people that are fans of the Western, even if you have a movie that makes fun of the Western.”

That was the vision of MacFarlane, who has made a movie about a man transported back into the American West. He wanted to see how today’s nerd would survive in that world; MRC and Universal, having made millions off MacFarlane’s “Ted,” were willing to walk out on a ledge with the horse that brought them.

The odds are pretty good: Six of the 11 Westerns released by major studios since 2005 have grossed more than $200 million, again, adjusted for inflation. And four of them made more money overseas than in the United States. The two notable failures, “Cowboys & Aliens” and “The Lone Ranger” suffered from a similar affliction: cost. They both grossed large sums, but not enough to cover their hefty price tags.

“Million Ways” is expected to open to $20 to $25 million this weekend — a solid start for a movie that cost $40 million to produce, but not enough to launch a global blockbuster.

Rest assured we’ll read a headline Monday about the struggles of the Western only to watch a new one next year.