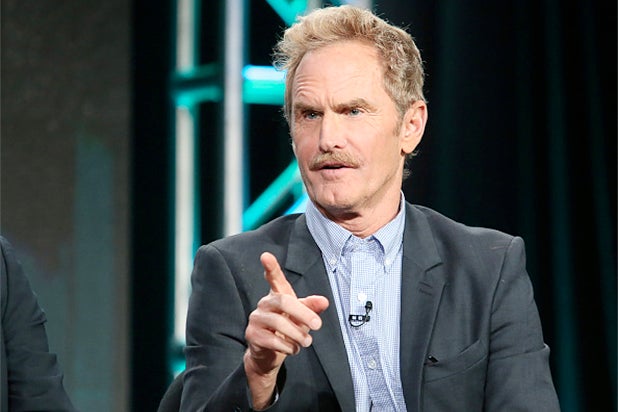 Netflix comedy “Game Over, Man!” has added Jere Burns to the cast, TheWrap has learned exclusively.

The film is set after a telethon is hijacked at The Stanford Hotel, and three unlikely losers must find a way to escape the hotel without being executed by terrorists. The title is a callback to the phrase uttered by Bill Paxton’s stressed-out Marine character in the 1986 sci-fi classic “Aliens.”

Holm wrote the script while Newacheck will direct. Devine, Holm and Anderson will also star in the film.

Burns will play Mr. Duncan, the father of Darren (Holm) and Joel (Anderson) who is not amused when his sons and their friend Alexxx (Devine) rope he and his wife into watching a presentation on a cockamamie get-rich plan. What he really wants is for his sons to find a real job and move out of his house.

Also Read: 'Workaholics' to End After Season 7 on Comedy Central

Burns is currently a Series Regular on TBS comedy “Angie Tribeca.”  Prior to that he was a regular on “Justfied” for FX.  He is represented by Innovative Artists and Trademark Talent.

A slew of favorite Netflix originals are returning in May, including “House of Cards” and “Master of None”

Some big shows are returning to Netflix in May, including fresh seasons of fan favorites "House of Cards," "The Unbreakable Kimmy Schmidt," "Master of None" and the last season of "Bloodline." And there are some new movies of note. But get ready to binge some flicks that are leaving over the weekend, including all three "Jurassic Park" installments.