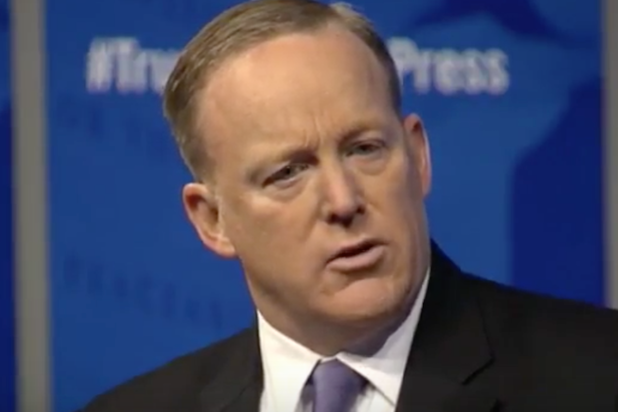 White House Press Secretary Sean Spicer is in hot water with reporters after reportedly refusing to allow his off-camera press gaggle to be recorded on Monday.

“The White House press secretary is getting to a point… where he is just kind of useless,” CNN’s Jim Acosta said on air. “If he can’t come out and answer the questions and they’re not going to do this on camera or audio, why are we even having these briefings or these gaggles in the first place?”

Acosta said the White House is “stonewalling” and called the situation “bizarre.” Spicer has become a household name for his combative press briefings, but they have become less frequent recently.

Must watch: @CNN's @Acosta says the White House is "stonewalling." Briefings are "basically pointless at this point" https://t.co/j6PsdqhkGI

“They bring us into the briefing room here at the White House and they wont answer these questions on camera, or let us record the audio. I don’t know why everybody is going along with this,” Acosta said. “It feels like we’re sort of slowly but but surely being dragged into what is a new normal in this country.”

Acosta also questioned why CNN even covered the gaggle, noting that Trump hasn’t had a legitimate press conference since February.

“This isn’t how we do things in this country but for whatever reason we’re all going along with it,” Acosta said. “If they can’t give us the answers to the questions on camera or where we can record the audio, they’re basically pointless.”

Acosta and the president have an interesting relationship, as Trump famously pointed at the reporter and called CNN “fake news” during a press conference earlier this year.

Check out some of the reactions to the White House’s decision not to allow the gaggle to be recorded:

The White House briefing room is filled but no cameras or audio are allowed for the breifing.

Call me old fashioned but I think the White House of the United States of America should have the backbone to answer questions on camera.

Why is today's briefing off cam? B/c POTUS spoke today & will make comments later so his voice should "be the one that speaks," Spicer says.

The Spicer off-camera/no audio gaggle has begun. I can't show you a pic of Sean. So here is a look at some new socks I bought over the wknd pic.twitter.com/wO9erspwYa

Isn't the camera-less Spicer gaggle really an attempt to get TRUMP not to watch it?

if a press gaggle is called and no one is around to attend, does sean spicer make a sound https://t.co/xmjVlyQwlp