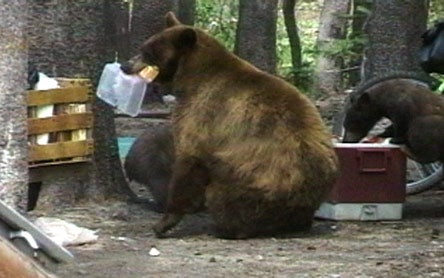 If you want to get ahead in Hollywood, apparently you’ve got to whisper.

CBS has done well for years with "The Ghost Whisperer." Cesar Milan draws great ratings for NatGeo with "The Dog Whisperer."
And now Animal Planet is looking to bring the world… "The Bear Whisperer."

The creature channel has scheduled a two-hour special revolving around Steve Searles, a professional bear wranger who uses non-lethal methods to help the Yogis of the world co-exist with humans. The two-hour documentary, from LMNO Cable Group, will air Thursday, Jan. 7 at 9 p.m.

The special is set in Mammoth Lakes, CA, where hungry, post-hibernation beers awaken just as summer tourists hit the resort town. Searles works with local authorities to control the bears so that they don’t have to be killed.

“I have learned over the years that the biggest, baddest and meanest bear is usually in control of the others,” Searles said. “My success is based on assuming that role and showing our bears who is boss. ‘Bear Whisperer’ will prove that we can co-exist with most wildlife if we take the time to understand how and why they behave the way they do and respect that.”

“Bear Whisperer” is an inspiring account of one man’s mission to save bears and at the same time, protect the public. The special took six months to shoot with the production crew often coming within just a few feet of the bears.

The special is a co-production between LMNO Cable Group and Animal Planet. Eric Schotz and Lisa Bourgoujian are executive producers, along with Animal Planet’s Lisa Lucas.