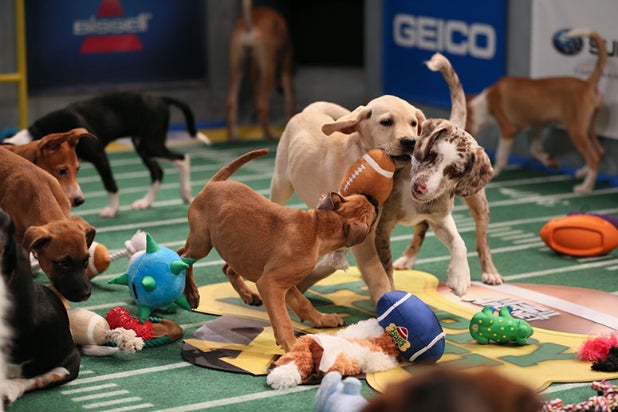 Animal Planet’s “Puppy Bowl” is back and celebrating its 10th year on this February’s coming Super Bowl Sunday, and the cable channel that provides the cuddly alternative programming is ramping up its own games.

The first-time Fantasy Game for “Puppy Bowl X” launched on Wednesday, where fans can choose their “pick of the litter” from a pool of 11 “players.” With it, Animal Planet touts that viewers can “track their team’s touchdowns and fumbles with Animal Planet’s online leaderboard.”

Here is how the Fantasy Game scoring breaks down: touchdowns and field goals (the latter if a toy finds its way through the uprights) are worth 5 points, takeaways count for 3, tackles for 2 and penalties (i.e. on-field “accidents” or roughing the pup) will net your drafted pooch -2 points.

Also in its inaugural year, Animal Planet wants viewers to share photos of their “Puppy Bowl” parties using the #PuppyBowl hashtag on Instagram. That one is Discovery Communications’ vice president of Digital Media, Miguel Monteverde’s favorite, he told TheWrap.

Those deemed most “crushworthy” with be posted live on-air through 11 p.m. ET on game day.

“We’re particularly excited about adding fans’ Instagrams in real-time to our broadcasts this year. It’s a first for Animal Planet, and just one of the many ways we’re evolving the on-air experience  by leveraging social media,” Monteverde said.

Some yet-to-be-announced features this year include a “Puppy Bowl Plus” second-screen experience app; a “Puppy Bowl” tumblr account with new content in the run-up to the event; a fansite that will follow the adoption stories of several of the puppy players; and access at AnimalPlanet.com to live events prior to Super Bowl Sunday — including round-the-clock access to a Times Square puppy “Practice Cam” planted at the site of the “Puppy Bowl Experience” (which runs from Jan. 27 to Feb. 1) in New York City, as well as a Washington (D.C.) Animal Rescue League 24/7 webcam overseeing the baby dogs in their “locker room” environment, the cable channel detailed to TheWrap.