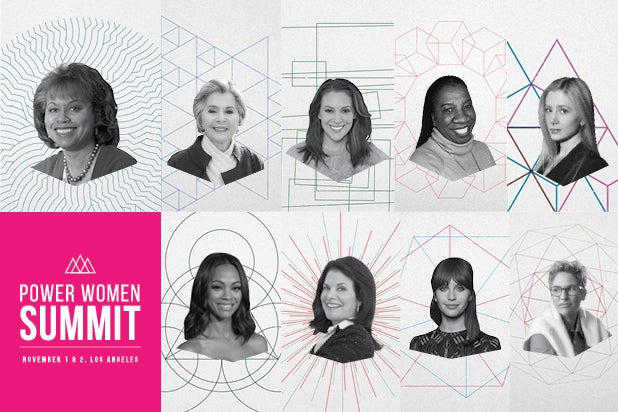 Just a few days before the historic midterm election, the focus of the Summit is to achieve gender equity in Hollywood, with the theme: The Road to 50/50 By 2020.

The Summit will be the largest gathering ever assembled of the most influential women in entertainment and media, attended and supported by studios, news organizations and nonprofits across the entertainment industry landscape. It is presented by the WrapWomen Foundation, a division of TheWrap News.

“Women are at an inflection point, and we want the Summit to be a catalyst toward real and lasting change in Hollywood,” said Sharon Waxman, the CEO of TheWrap and founder of the Summit.

Music power trio HAIM will perform and be interviewed about their views on pay equity for female musicians. Former US Senator Barbara Boxer and her daughter Nicole will record a live podcast with Alyssa Milano on opening night; legendary activist Dolores Huerta will speak on political activism with Congressional candidate Katie Hill and actor/activist Zoe Saldana; author Joanne Lipman will lead a lunchtime conversation with producer Scott Budnick about bringing men into the conversation. In addition, Anita Hill will give an address on “changing the system” around sexual harassment.

Topics of conversation include: taking risks, trailblazing women who are on the front lines and paving the way for their predecessors, the new generation of activists, equal pay, sexual harassment, diversity and inclusion, entrepreneurship and more. There will be main-stage sessions and deeper dive discussions with showrunners, producers, directors, talent, journalists and executives. There will be mentorship sessions and a space for stand-up comedians to workshop.

The Summit will recognize #MeToo survivors in attendance, and will give an inaugural Voices of the Future award to Jaclyn Corin and Bria Smith, leaders in the March for Our Lives movement.

A year after #MeToo, Power Women Summit will inspire and empower 1,000 women across their professional careers and personal lives for two days of education, inspiration, mentorship, workshops and networking to promote the goal of women’s leadership and gender balance in media and entertainment.

TheWrap’s WrapWomen Foundation, a 501c(3), is a leading force in creating a more equitable world especially for women in entertainment, media and technology. Through media and live events, WrapWomen provides a platform that supports the mission of the foundation.

About The Wrap News Inc:

TheWrap is the leading digital-first news organization covering the business of entertainment and media via digital, print and live events.  Founded by award-winning journalist Sharon Waxman in 2009, The Wrap News Inc. is comprised of the award-winning, industry-leading website with its high-profile newsbreaks, investigative stories and authoritative analysis.

In 2018 TheWrap won best website for a news organization exclusive to the internet at the L.A. Press Club’s SoCal Journalism Awards. The Wrap News, Inc. is backed by Maveron, a venture capital firm based in Seattle, Washington and co-founded by Starbucks CEO Howard Schultz and Dan Levitan.