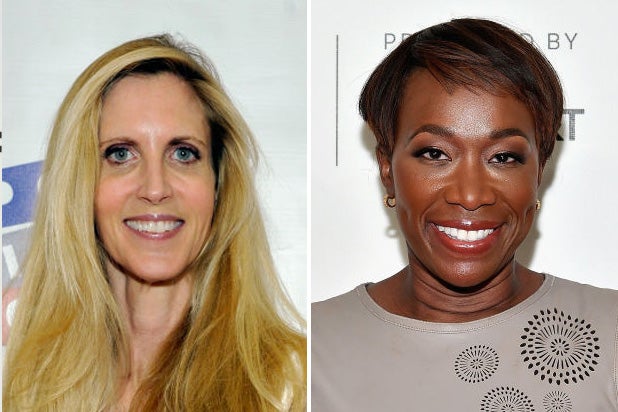 Ann Coulter has fired back at Joy Reid over a series of newly resurfaced tweets from the early 2010s in which the MSNBC anchor joked about “that Coulter dude.”

Speaking to TheWrap, Coulter sidestepped Reid’s old online taunts but questioned the MSNBC host’s standing to speak about black issues in the United States since the MSNBC host’s parents immigrated from Congo and British Guiana.

“I think MSNBC would be better off hiring an African American with roots in this country, instead of a 2d generation immigrant who poses as the oppressed descendant of American slaves,” Coulter said.

Reid has taken heavy flak over the last week after Mediaite reporter Caleb Ecarma revealed transgender jokes and other content attacking LGBT individuals on Twitter and on Reid’s long-defunct blog “The Reid Report” which predates her time at MSNBC.

The latest was a series of tweets from 2010 and 2011 about Coulter, falsely suggesting that the conservative firebrand and best-selling author “is a dude.”

while @JoyAnnReid denied writing the anti-gay posts published on her blog that I reported earlier today (https://t.co/HUHSgS5e9N), here are 4 tweets that are still up in which Reid makes transgender jokes about Ann Coulter pic.twitter.com/UaYCzorGGl

The MSNBC anchor said this week many of the new posts that have recently surfaced were fabricated and also suggested, without substantiation, that hackers somehow managed to tamper with the Internet Archive’s Wayback Machine to deliberately add  embarrassing content to her old blog.

“In December I learned that an unknown, external party accessed and manipulated material from my now-defunct blog, The Reid Report, to include offensive and hateful references that are fabricated and run counter to my personal beliefs and ideology,” Reid told TheWrap in a statement.

The Internet archive disputed that claim in a blog post on Tuesday, saying that while Reid’s lawyers had demanded the old material be taken down, the website could find no evidence of hacking.

“When we reviewed the archives, we found nothing to indicate tampering or hacking of the Wayback Machine versions. At least some of the examples of allegedly fraudulent posts provided to us had been archived at different dates and by different entities,” said Chris Butler, the Director of Open Libraries at the Internet Archive.

Though MSNBC began circulating a statement from a cybersecurity expert attesting to Reid’s position, many said the tampering that Reid has claimed would be impossible given how the Archive worked.

“The Wayback Machine captured these posts at or near the time they were posted – over ten years ago. For this account to make sense, someone would have had to access Reid’s blog with Dark Web credentials, then travel back in time,” said BuzzFeed’s Joe Bernstein.

Also, the Wayback Machine captured these posts at or near the time they were posted – over ten years ago. For this account to make sense, someone would have had to access Reid's blog with Dark Web credentials, then travel back in time https://t.co/1QxuL94fvG

The controversy over Reid’s social media commentary first began last year when Mediaite dug up old blog posts from Reid mocking then-Florida governor Charlie Crist, repeating speculation that he was a closeted homosexual — which he has repeatedly denied.

Reid apologized for those posts in a statement to TheWrap and Crist himself said it was water under the bridge.