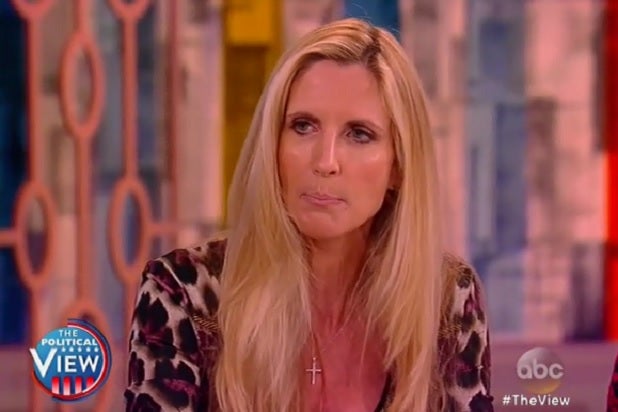 Coulter took Raven-Symone to task after the “View” co-host attempted to grill Coulter on her abrasive rhetoric. Noting that her mother had taught her as a child that, if you don’t have anything nice to say, you shouldn’t say anything at all,  Raven-Symone asked, “Why do you think it’s important to mudsling?”

Coulter didn’t miss a beat, bringing up Raven-Symone‘s controversial statement on a recent “View” episode, when she said that she would discriminate against people with “ghetto” names, noting, “I’m not about to hire you if your name is Watermelondrea.”

“I’m at least talking about policy. You have a position on what people’s names should be. Watermelondrea,” Coulter shot back. “I’m talking about a government policy that affects all Americans and immigrants and the people living here, and is harming our country. So you don’t follow [a no-mudslinging policy].”

And for once, at least for a glorious moment, Raven-Symone was silent.

During her guest appearance, Coulter also expounded on her support for Republican presidential candidate Donald Trump. Reminded that, in 2013, she said that America shouldn’t have a businessman as president, Coulter said that Trump is the exception to the rule, because while other candidates who don’t come from a political background are “not prepared for the rough and tumble of politics,” Trump has been enduring public and media criticism for decades.

She also suggested that Trump is a desirable candidate because he has nothing to gain by holding political office.

“Reagan, Romney, Trump — the only people who have run for president whose lives will be made immeasurably worse both by running and by winning,” Coulter said.