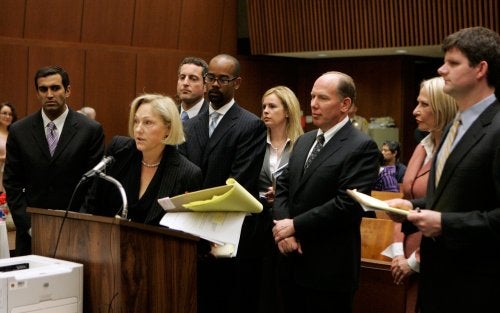 After a longish hearing Friday the three defendants accused of conspiring to illegally supply the late actress Anna Nicole Smith with a staggering variety of sedatives and painkillers got their trial date: Aug 4.

The superficial bonhomie between prosecutors and defense attorneys will undoubtedly erode during the courtroom clashes that lie ahead. A possible indication of how far apart the two sides are in their perceptions of the case may have been revealed when Judge David Wesley asked defense attorney Steven Sadow and Deputy D.A. Sean Carney how long they thought the trial will last.

Wesley: Three months? In here? Not in this court.

The players in this drama will next meet with Judge Wesley at an April 23 hearing.