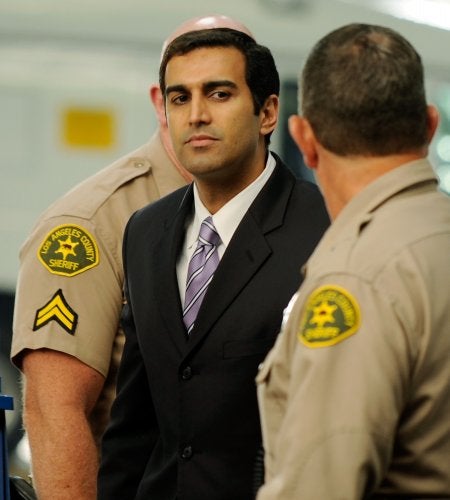 The preliminary hearing that will decide whether Anna Nicole Smith’s case is ready for primetime supposedly will wrap up this week.

This is good news for Smith’s former boyfriend and two doctors, who’ll soon thereafter learn whether they will stand trial for supplying Smith with a veritable candy store of prescription opiates and downers.

You’ve got to give co-prosecutor Renee Rose credit – she certainly tries. A while back it seemed as though she was going to run to the bench and arm-wrestle Judge Robert Perry for the right to introduce the evidence-that-dare-not-speak-its-name – that Smith and defendant Dr. Khristine Eroshevich were lovers.

And Tuesday her attempts to publicly introduce photographs reportedly showing the two nude in a bathtub together were firmly shot down by Perry.

But then came the expert witnesses. Last week, prosecutor Rose brought out Kenneth Krause, a Homeland Security special agent who droned on for much of Friday morning, establishing the dates on which members of Smith’s posse flew from the U.S. to her home in the Bahamas.

Krause was followed by Jennifer Doss of the California Department of Justice, who spent the rest of that morning detailing all the times members of that same entourage picked up prescriptions — under their names and the names of others — that allegedly were intended for Smith.

Rose’s purpose was clear, as the dates of those pharmacy pickups often neatly coincided with the errand runners’ departures to Nassau International Airport.

Rite-Aid, Ralphs, Sav-On, Key and AMC – this was the roll call of family pharmacies from which Smith’s enablers allegedly scooped up supplies for her pantry of Demerol, Dilaudid, Methadone and other sedatives and painkillers.

“Just make sure you get the Dem for two months … and put it in Howard’s name,” read a jaunty email allegedly sent from Smith in the Bahamas to defendant Howard K. Stern’s sister, Bonnie.

Tuesday’s testimony began with deputy district attorney Sean Carney taking over for Rose by examining Dr. James Gagne, a seen-it-all addiction pro who’s affiliated with a wide spectrum of local hospitals, and visits patients at Malibu’s Canyon at Peace Park (not to be confused with Anna Nicole Smith’s Valley of the Dolls.)

Dr. Gagne, who acknowledged that he was getting paid for 40-50 hours of review work for the D.A., at $150 an hour, with an extra $200 an hour for testifying, was somewhat formal in the witness chair and at times swiveled from side to side.

He appears far more laid back on his website, where he’s “Jim” and takes time out to let readers know how to pronounce his name. “’Say Gone-YAY!’ (rhymes with ‘Monet’),” suggests Gagne. “I kid people that the easiest way to remember my name is you’re happy when I leave (‘Yay! he’s gone.’).

Dr. Gagne hadn’t exactly worn out his welcome by the time he began testifying about Smith, but it had certainly taken a while for Carney to stop asking him questions about the care and handling of addicts in general and to get to Smith in particular. (“Really, Mr. Carney, we have to move along,” an impatient Judge Perry urged.)

Gagne was specifically asked about his evaluation of the care given to Smith by Dr. Sandeep Kapoor, the case’s third co-defendant (pictured above).

Gagne definitely found that treatment wanting. The portrait of Kapoor that emerged today was one of a physician who wouldn’t or couldn’t stand up to a strong addictive personality.

Kapoor, when he tried to wean Smith off Dilaudid, which Gagne described as “hospital heroin,” had prescribed that she seek addiction counseling. Her refusal, coupled with Kapoor’s acquiescence, was a sign of negligent care, Gagne said.

Moreover, Gagne claimed, Kapoor continued Smith’s old Methadone prescription, even though, Gagne said, Kapoor was not authorized to do so. Kapoor even prescribed large amounts of Dilaudid for a simple rib fracture Smith suffered from a slip-and-fall. Another no-no, according to Dr. Jim.

Meanwhile, Kapoor, who has sat perfectly composed during these hearings, spent the morning furiously taking notes.