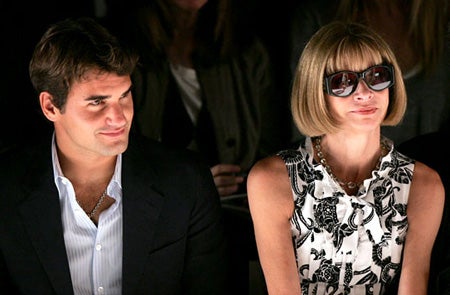 No one is going to accuse Anna Wintour of steroid use. But her name — as far as the fashion magazine industry is concerned — is bigger than Barry Bonds’ head. Or a Prada handbag. (How about Roger Federer’s forehand? Sorry, I’m more comfortable with sports references.)

She’s easily the most famous magazine editor in the world – probably the most recognizable — so this was a no brainer: Wintour was elected to the Magazine Editors’ Hall of Fame on Monday, where she will join fellow magazine editorial giants including Martha Stewart, Tina Brown, Hugh Hefner, Gloria Steinem, Jann Wenner and Helen Gurley Brown.

From the bio provided by the American Society of Magazine Editors:

"Anna Wintour began her career in 1970 in the fashion department of Harpers & Queen in London and joined Harper’s Bazaar after moving to New York in 1976. She became a senior editor at New York in 1981 and creative director at Vogue in 1983. In 1986, she was named editor-in-chief of British Vogue, then returned to the United States to edit HG from September 1987 until she was appointed editor-in-chief of Vogue in July 1988. In 2001, she led the launch of Teen Vogue and continues to serve as editorial director of the publication.

Ms. Wintour’s leadership within the fashion industry has won her the Council of Fashion Designers of America Lifetime Achievement Award and the Award of Courage for AIDS Research from the American Foundation for AIDS Research. She is an honorary trustee of the Metropolitan Museum of Art, where she has co-chaired 11 fund-raising galas for the Costume Institute. In 2008, Ms. Wintour was awarded the Order of the British Empire by Queen Elizabeth II, and in 2009 she was named to the President’s Committee on the Arts and Humanities by President Obama."

Despite her high profile, Wintour doesn’t make many public speeches, so her induction –part of the National Magazine Awards gala in New York on April 22 – will be, at the very least, more fashionable to attend than others. (Perhaps Federer will introduce her.)

It will also fuel the ongoing speculation that she will leave her Vogue post in the not-too-distant future.